Newlyweds turn back clock on deforestation

GARUT, Indonesia (CNN) -- The people of Indonesia's Java Island still follow wedding traditions passed down centuries ago by their ancestors. 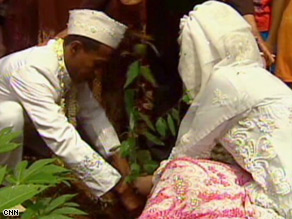 Cucu and his bride, Yati Supriyatna, plant two saplings during their wedding ceremony.

Family members gather for an all-day ceremony that begins with the groom bringing a gift to the bride's house.

On a hot and sticky morning in a village near Garut, 26-year-old Cucu carries a sapling to give to his bride. The young tree is not exactly a unique gift; it's part of a government initiative to bring back the Garut province's devastated forests.

Newly married couples must plant 10 trees under the program. If they divorce, they must plant 50 others.

Cucu and his bride, Yati Supriyatna -- both dressed in all white -- headed to a mosque in the foothills of West Java's mountains, where they carefully planted two saplings, a symbolic gesture.

They will plant the other saplings -- eucalyptus, avocado and mahogany -- at the sleepy village about an hour outside Garut where they plan to settle, for now.

Indonesia's landscape has been devastated by massive deforestation. Though not a heavily industrialized nation, Indonesia is behind China and the United States as the world's third largest producer of greenhouse gas emissions.

That is largely the result of the removal of its trees, which cut down the absorption of carbon dioxide.

While Garut province is not the country's worst offender, a Garut forestry official said he can no longer ignore the damage.

"Most people here work in agriculture which is of course highly dependent on the fertility of the soil," said Eddy Muharam of Garut's forestry department. "The fertility is decreasing now because of deforestation and intensive use of soil."

Forestry officials have identified "critical land" in Garut, which has been overfarmed and needs to be reforested. The overfarming leads to erosion, which can cause major flooding.

Environmental officials estimate that 50 million trees are needed in Garut alone to reverse the harm done by overfarming.

Indonesia's government does not have the funds to pay for such an initiative. So they hope the trend of planting saplings will catch on among other newlyweds in Indonesia.

"It's sacred and a once in a lifetime moment, so we thought that it would be a good time to encourage people's participation," Muharam said.