LAHORE, Pakistan (CNN) -- It's hot and sweaty in a rat-infested room in Lahore's historic red light district, a neighborhood of narrow alleyways lined with brothels. 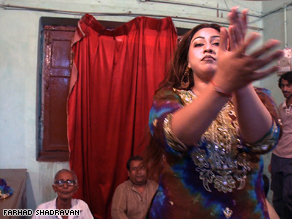 A dancer does the "mujra," a traditional dance banned by a judge for being "vulgar," in Lahore, Pakistan.

A barefoot, long-haired woman is gyrating and twirling on the carpet, to the beat of a four-man band whose drummer sweats profusely as he pounds out a furious rhythm.

The dancer, who only gives her first name, Beenish, is performing a kind of Pakistani belly-dance called the mujra.

Her harmonium player, a skinny bald man who squints through coke-bottle glasses, has been performing like this for the past 50 years. But he says the art form is dying out.

"That spark, the way it was in the past, is no more," said Ghulam Sarwar.

Last fall, a judge in Lahore's high court declared the mujra dance "vulgar" and banned it from being performed on stage.

Some here say the government is cracking down on easy, "immoral" targets in an attempt to appease religious hard-liners like the Taliban. Islamist militants are believed to be responsible for a recent wave of bomb attacks in Lahore, targeting cinemas, theaters and cafes where young men and women fraternize together.

"It is a gesture of good will to pacify the mullahs and the Taliban," said Samia Amjad, a lawmaker in the provincial assembly. Though she is a member of an opposition political party, she said she supported the crackdown on vulgarity. "I see it as an essential part of Islam."

Dancers aren't the only targets of the court censors.

"If the current circumstances persist in Pakistan," said Noora Lal, one of the banned singers, "then singing will die out in this country."

Pakistan is a deeply conservative Muslim nation, where the punishment for blasphemy is the death sentence.

But there is one person in Lahore who openly mocks the conservative establishment: painter and restaurant owner Iqbal Hussain.

Though he said he has received multiple death threats from Islamist fundamentalists, Hussain continues to be Pakistan's most vocal defender of prostitutes. All of the models portrayed in his paintings are sex workers.

"I portray them on canvas, portray them as human beings," Hussain said, "They feel pain. They want their children to be educated."

Hussain knows the industry intimately. He was born to a family of sex workers. His mother, a former prostitute, passed away last month at the age of 98.

The small, soft-spoken painter has turned the house he grew up in, an old four-story building with ornate wooden balconies, into a popular restaurant for tourists and wealthy Pakistanis. On one side of the house there is a brothel, on the other side, the 17th century Badshahi Mosque, one of the largest mosques in the world.

In his subversive paintings, which Hussain said sell for more than $10,000 each, he highlights the overlap between Lahore's sex industry and its religious community. In one canvas, hundreds of worshippers are depicted prostrating themselves around the mosque, while in the foreground, two women apply lipstick and makeup on a balcony.

Hussain explained that the prostitutes in the painting were preparing to receive new customers as soon as the prayers in the mosque were over.

Watch the dance being called "immoral" in Pakistan »

The painter claimed that on religious festivals, the brothels and dance halls in his neighborhood overflow with customers.

"They come from the northern areas with their turbans," Iqbal said, laughing. "All coming to this area. They're not going to the mosque ... but to the brothels!"

Nevertheless, the rising tide of the Taliban in northwestern Pakistan has some residents of Lahore's red light district worried.

"May Allah keep us safe from them," said Beenish, the mujra dancer. "We are poor, humble people. They should not target this place."

All About Pakistan • The Taliban • Lahore • Islam