Pakistan kills 80 in assault on Taliban

ISLAMABAD, Pakistan (CNN) -- Pakistani armed forces have killed 80 militants since launching an assault on a region recently held by the Taliban, the military announced Sunday. 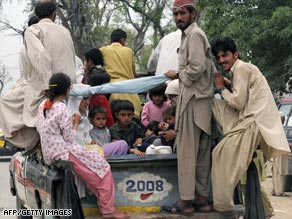 Three soldiers have been killed and eight wounded in the crackdown in the Buner district in the northwest of the country, the military statement said.

The Pakistani offensive started in the province last Sunday, after Taliban militants moved into Buner, a move that alarmed U.S. and Pakistani officials.

The incident appears to be separate from the hostilities in Buner.

However, it reflects the tensions in the region and could signal a spread of fighting resulting from the crackdown.

In the incident, about 100 militants attacked a Frontier Corps post in the Mohmand Agency, or district, an area where militants hold great sway. Troops returned fire and killed the 16 militants, the military said.

Mohmand is in the country's Federally Administered Tribal Areas that border a volatile region in war-torn Afghanistan and Pakistan's North West Frontier Province.

Earlier this year, Pakistan had entered into an agreement with militants, allowing them to enforce Islamic law, or sharia, in parts of Swat Valley in exchange for ceasing violence. The Swat Valley is a broader area that includes several provincial districts, including Chitral, Swat, Shangla, Malakand, Upper Dir, and Lower Dir.

Representatives from Pakistan's government and the Taliban restarted their negotiations on Friday and were planning to have another session soon, a provincial spokesman said.

The Pakistani government has been criticized for not cracking down on militants along its border with Afghanistan. As a result, the U.S. military has carried out airstrikes against militant targets in Pakistan, which have rankled relations between the two countries.