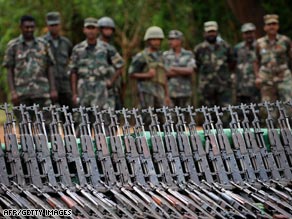 Recently captured rebel weapons stacked up in the former Tamil stronghold of Kilinochchi.

The claims of military victories came a day after Sri Lanka ordered an end to combat operations against the rebels by curtailing "the use of heavy-caliber guns, combat aircraft and aerial weapons which could cause civilian causalities," a statement from the Presidential Secretariat said.

The rebel site accused the military of staging a ground offensive, "firing artillery shells fitted with cluster munitions, multi-barrel rocket launcher (MBRL) fire and heavy mortar fire from many directions on the northern side of Mu'l'li-vaaykkaal."

The Tiger leadership has asked the international community to "pressure the Sri Lankan government to reciprocate" on a cease-fire offer proposed last week. The United States, the United Nations, the European Union and India have called for a cease-fire.

Last week, India's foreign secretary and national security adviser met with Sri Lankan President Mahinda Rajapaksa to express their concerns about the situation in the north, including casualties among civilians. India has a large Tamil population that sympathizes with the plight of Tamils in Sri Lanka.

The foreign ministers of two nations are due in Sri Lanka on Wednesday -- David Miliband of the United Kingdom and Bernard Kouchner of France.

Carl Bildt of Sweden was originally scheduled to make the trip with his counterparts, but was not granted a visa, so he was forced to cancel, the Swedish Foreign Ministry said Tuesday. In what amounts to a diplomatic protest, Sweden will recall its ambassador to Sri Lanka for consultations.

A government-imposed deadline for the Tigers to surrender passed a week ago. Tens of thousands of displaced civilians currently remain wedged in a dwindling swath of territory controlled by the Tigers along the country's northeastern coast.

Government troops say they have rescued some 40,000 civilians trapped in the area, but a U.N. refugee agency said Friday that a wave of "fresh displacement" now exceeds 100,000 people.

The Sri Lankan military says up to 20,000 civilians continue to be held hostage by Tamil "terrorists," adding that its forces will continue humanitarian operations to rescue them.

Fifty metric tons of relief supplies -- which landed in Colombo on Monday -- will be sent by UNICEF to the north to help displaced residents.

UNICEF, which called the situation in the north a "catastrophe for children," said the displaced lack food, water and basic medical supplies.

The rebels estimate the number of civilians still in the territory at more than 160,000.

The Tigers have been fighting for an independent state in Sri Lanka's northeast since 1983. As many as 70,000 people have been killed since the civil war began, and the group has been declared a terrorist organization by 32 countries, including the United States and the European Union.