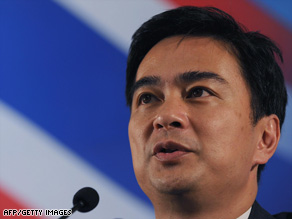 Prime Minister Abhisit Vejjajiva lifted the emergency order for Bangkok and nearby provinces, according to Panitan Wattanayagorn, a government spokesman. National security agencies have indicated that the threat of violence has eased.

The announcement followed two days of parliamentary debate aimed at solving the political crisis, but no consensus has been reached.

Bangkok's streets have been quiet for about a week, after protests engulfed many parts of the capital. Supporters of deposed former Prime Minister Thaksin Shinawatra continue to gather during evenings, but do so peacefully.

Abhisit told CNN a week ago he would not lift the order until he was convinced that the capital wouldn't "return to chaos and violence."

Last Friday a Thai protest group leader who helped topple Thaksin was shot and wounded on the way to host his radio talk show, according to a spokesman for his political party.

Sondhi Limthongkul underwent surgery and was expected to remain hospitalized until next week, a hospital official told CNN on Monday.

The shooting was the latest chapter in weeks of widespread political unrest in Thailand, pitting loyalists to Thaksin against Abhisit's supporters. Thaksin fled Bangkok last year while facing trial on corruption charges that he said were politically motivated. He was ousted in a coup in 2006.

Abhisit declared the state of emergency on April 11 after protesters forced the postponement of a summit of Asian leaders in the southern coastal city of Pattaya, embarrassing the government.

Immediately after Abhisit's state-of-emergency declaration, dozens of protesters stormed the country's Interior Ministry and pelted Abhisit's car with rocks, chairs, flags and sticks as he escaped.

Abhisit acknowledged: "There was no question that my life was seriously threatened," and he agreed that there was a moment when he thought he might be killed.