(CNN) -- Taliban advances in Pakistan are raising concerns in Islamabad and capitals as far away as Washington.

CNN's senior international correspondent Nic Robertson looks at how the Taliban spread and what could be done to help Pakistan. 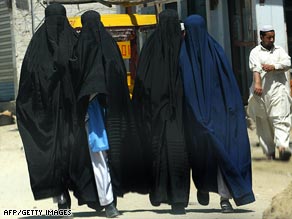 Students in burqas in Buner district

But the Taliban has also extended its influence because it is now involved with several Punjab terrorist groups that have affiliated themselves with the border Taliban and have helped commit some attacks such as one on a police station in Lahore.

The Pakistan government has been cutting deals with the different elements that were Taliban or became Taliban since 2004-2005. Those deals have enabled the Taliban to extend themselves.

Is Pakistan going to fall or fail?
The overall answer to that is no. But the Taliban is further destabilizing an incredibly unstable situation.

There is a weak government that faces challenges, not only from the Taliban but also from almost every political party in the country. It faces challenges from across the border with its old enemy India, which means a large percentage of the Pakistan army is tied up on that border rather than fighting terrorism.

The Taliban is not going to take Islamabad, but its attacks and advances are going to weaken an already unstable government and make an already dangerous situation even more volatile... and that will mean the Taliban will be able to wield more influence in the future than they do today.

What options are open to the Pakistan government and other countries?
Pakistan could form a broad-based government of national unity and appeal for more international support in terms of encouraging financial aid and having trade restrictions lifted so they can improve the economy.

The international community could help Pakistan resolve issues with India. It would help the economy and help the government focus on its own internal problems and better influence the situation in Afghanistan.

What the Pakistan government would also need to do is convince its people that outside support and help is in their best interests to deal with terrorism and stabilize the country.

To do that the government would also have to win the support of its large Pashtun minority, from whom the Taliban draws a lot of its support ... and that is difficult particularly as the U.S. -- which would need to be a principle supporter of Pakistan -- continues to bomb targets in Pashtun areas leading to civilian casualties.