ISLAMABAD, Pakistan (CNN) -- A radical cleric imprisoned for his role in a deadly Pakistan mosque siege has vowed to continue his campaign to impose hardline Islamic law in his first sermon since being released. 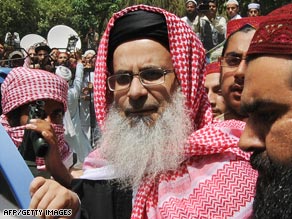 Maulana Abdul Aziz gave his first sermon since being released from house arrest.

Addressing Friday prayers in the battle-scarred mosque, Aziz said he was willing to see more blood spilled for his cause.

"My only son was killed for this great mission of Islam," he told a capacity crowd at the mosque. "If I had 100 sons, I would ask them to die for Islam."

Aziz was arrested after the Pakistani government laid siege to the mosque in July 2007 to crack down on its efforts to promote Taliban-style sharia law. He was seized while trying to sneak away disguised with a women's burqa.

He was held under house arrest until Pakistan's Supreme Court allowed his release late Thursday. It was the latest in a series of concessions by the government of President Asif Ali Zardari to Islamist militants.

During Friday's sermon, Aziz argued that his supporters' fierce resistance during the siege, helped lead to a recent peace deal between the Pakistani government and Taliban militants in Pakistan's northwestern Swat Valley.

In an interview with CNN, Aziz's spokesman Mohammed Amir Siddique said the cleric had no direct ties with the Taliban, but added "We support them morally."

At an international donors conference in Tokyo, countries including the United States and Saudi Arabia reportedly offered a total of $5 billion in aid to help boost economic development and improve security.