WASHINGTON (CNN) -- As U.S. nuclear experts prepared to leave North Korea, the United States vowed consequences on Pyongyang for expelling them, along with U.N. nuclear inspectors. This is after the United Nations condemned North Korea's recent missile launch. 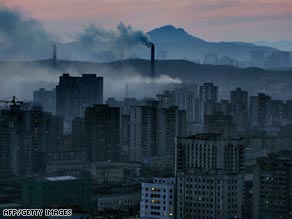 Hillary Clinton has called the moves coming out of Pyongyang, pictured, unnecessary.

Four U.S. experts monitoring North Korea's Yongbyon nuclear plant were preparing to depart the country in the next several days after North Korea ordered them to leave, State Department acting spokesman Robert Wood said. A small team of experts has been rotating into the facility since November 2007.

Wood said the U.S. has talked with Pyongyang about the expulsion and insisted the North Koreans would face consequences for "kicking these personnel out."

The committee, Wood said, is determined to prevent the flow of goods that could be used to support North Korea's nuclear program, as well as entities supplying the North with nuclear technology.

Wood said the committee would have further discussions on the the list of goods and entities to be sanctioned. Under a presidential statement passed by the U.N. Security Council on Monday, the council would take up the sanction issue if the committee could not come to agreement by April 24.

The International Atomic Energy Agency said its inspectors left North Korea on Thursday after being ordered out by the reclusive nation.

"IAEA inspectors at the Democratic People's Republic of Korea (DPRK) Yongbyon nuclear facilities, on 15 April, removed all IAEA seals and switched off surveillance cameras," a statement from the agency said. "This follows the DPRK informing the inspectors, on 14 April, that it had decided to cease all cooperation with the IAEA, requested removal of containment and surveillance equipment, and required the inspectors to leave the DPRK at the earliest possible time."

North Korea has said that it will reactivate all of its nuclear facilities and go ahead with reprocessing spent fuel. On Tuesday, U.S. Secretary of State Hillary Clinton called Pyongyang's move "an unnecessary response to the legitimate statement put out of concern by the (U.N.) Security Council."

"Obviously, we hope there will be an opportunity to discuss this, not only with our partners and allies, but also, eventually, with the North Koreans," she said.

In addition to ordering the nuclear watchdog out of North Korea, Pyongyang has left six-party talks focusing on its nuclear program and has vowed to bolster its nuclear self-defense capabilities.

In a statement carried by the state-run Korean Central News Agency, the North Korean Foreign Ministry called the U.N. condemnation of the nation's April 5 rocket launch a gross infringement on North Korea's sovereignty.

The North Korean government insisted the act was a peaceful launch of a satellite into orbit, but U.S. officials declared it a "provocative act" in violation of a 2006 Security Council resolution prohibiting Pyongyang from conducting ballistic missile launches.

China, Japan, Russia, South Korea and the United States have been involved in the six-party talks with North Korea.