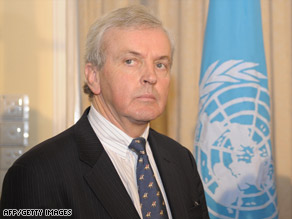 John Holmes, the under secretary general for humanitarian affairs and emergency relief coordinator, told reporters that the 48-hour break in hostilities was not sufficient, even as fighting resumed in the northeast of the country.

The brief cessation of hostilities was announced by the Sri Lankan government on April 12 and allowed the U.N. and its partners to bring in necessary aid, said Holmes. He said he would have liked a "proper humanitarian pause" that lasted longer than two days, but hoped the break allowed for some progress to occur.

Secretary-General Ban ki-Moon had originally welcomed the announcement by the Sri Lankan government. However, Ban also expressed his concern that, "This is less than the full humanitarian pause of several days I had pressed for."

But Ban added that the pause "is nevertheless a useful first step and an opportunity to move towards the peaceful and orderly end to the fighting now so badly needed."

The government of Sri Lanka has been battling the Liberation Tigers of Tamil Elam (LTTE) rebels in a civil conflict that has lasted nearly 25 years. The LTTE has been declared a terrorist organization by 32 countries, including the United States and the nations of the European Union. As many as 70,000 people have been killed since the conflict officially began in 1983.

The most pressing concern now, according to Holmes, is the fact that over 100,000 people are currently crowded in a "very small pocket of land" that is about five square miles, or about twice the size of New York's Central Park. "It is a very small area indeed for what we believe is very large number of people" Holmes explained. The crowded population, primarily comprised of Tamil civilians, is subject to the continuing Sri Lankan government assaults.

The British and French foreign ministers released a joint statement as well on Wednesday, claiming that the LTTE is also using Tamil civilians as human shields.

Holmes also called attention to the fact that the press has been barred from covering the civil strife in Sri Lanka. Ultimately, Holmes and the United Nations would like to see a peaceful end to the hostilities, but "its pretty clear, frankly, that a ceasefire as such is not something available at present circumstances."