TOKYO, Japan (CNN) -- The clicking of dozens of news cameras drowned out the sobs of the 13-year-old girl, but her face explained what was happening in the departure hall of Japan's Narita International Airport. 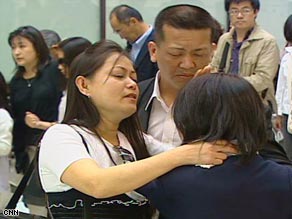 Noriko Calderon, wearing her school uniform, was being forced to make one of the most wrenching choices of her young life: To stay in the country of her birth rather than join her parents being deported to the Philippines.

The scene was the emotional climax to a story a decade and a half in the making -- one that has tugged at heartstrings in Japan, but ultimately failed to sway to an unyielding bureaucracy that activists say violates human rights.

Sound off: Do you think Japanese authorities are doing the right thing?

Filipinos Arlan and Sarah Calderon illegally entered Japan in the early 1990s on fake passports. They married and had a daughter, Noriko.

Noriko, like many Tokyo girls her age, loves hip-hop and hopes to be a dancer or a teacher at a dance school someday.

But her future in the only country she's ever known went into limbo when Japanese immigration authorities arrested her mother in 2006.

Her parents decided to fight Japan's notoriously rigid immigration laws and for three years under a harsh media spotlight, they argued their case all the way to the country's High Court, saying Arlan is gainfully employed and their daughter only speaks Japanese.

The family lost their case in the High Court, and Japan ordered Arlan and Sarah Calderon be deported back to the Philippines.

Activists claim Japan's notoriously rigid immigration laws violate human rights. An estimated 500 families are in the same situation according to lawyers, who accuse Japan of not respecting the UN Convention on the Rights of the Child.

Japan's Immigration Bureau in a statement to CNN said the couple's illegal presence in the country as an "extremely malicious" violation that "shakes the foundation of Japan's immigration control."

But when it came to 13 year old Noriko, the government gave the girl a choice: Her country or her parents.

"Japan is my homeland," says Noriko, when asked why she is choosing to stay behind. She will move in with an aunt, allowed to stay in Japan under a visa that the government will reassess yearly.

Her life, say her parents, will be better in Japan. She'll have schooling and the dreams a big city like Tokyo can offer her, versus the impoverished farm community her parents will move back to in the Philippines.

But as the Calderons packed up their small apartment in the days leading up to the deportation, the reality of what would soon happen to the family became more and more harsh.

"Until I'm an adult, I need my parents," Noriko said, her pink cheeks stained with tears.

"We won't be there when she needs us the most," said Arlan Calderon. "She has to protect herself on her own. I'm so sorry about that."

Shogo Watanabe, the Calderons' attorney, collected more than 20,000 signatures in Japan to try and keep the family together in the country.

"Children should be protected when their parents are punished. It's the child's right. But there's no consideration for that at all. I do not think the government is being flexible," said Watanabe.

Under Japanese immigration laws, the Calderons won't be allowed back into Japan for five years.

They've asked for a special waiver to visit their daughter after a year, but it hasn't been granted yet. So their last, public hug could be the last time they see their daughter until she's 18.