ISLAMABAD, Pakistan (CNN) -- Pro-Taliban cleric Sufi Mohammad has announced he has pulled out of a peace deal in the violence-plagued Swat Valley, saying the government is not serious about implementing Islamic law, or sharia, in the region. 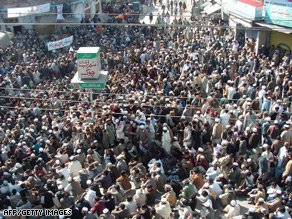 Supporters of cleric Sufi Mohammad gather as they march during a peace rally in the Swat Valley.

Mohammad brokered the cease-fire in late February between the Pakistani government and his son-in-law, Maulana Fazlullah, who commands the Taliban in Swat Valley.

With the deal, the area would come under sharia law, which -- under the Taliban's strict interpretation -- would prevent women from even being seen in public without their husbands or fathers.

Mohammad has set up a protest camp at the headquarters of his son-in-law's Taliban-aligned group, Tehreek Nifaz-e-Shariat Mohammadi (TNSM), according to a police official. The headquarters are located in Batkhelah in the Malakand agency of North West Frontier Province.

Speaking to reporters Thursday, Mohammad expressed frustration that President Asif Ali Zardari had not signed off on the peace deal. He blamed the Pakistani government for any bloodshed that might follow.

Watch how peace talks have hit a hurdle »

Mohammad's pullout does not automatically mean the deal is over. The Taliban, itself, has not announced whether or not it too is pulling out.

A lawmaker with the Awami National Party (ANP) of the North West Frontier Province -- where Swat is located -- said he did not expect fighting to resume.

"God willing, there won't be anything that happens to take this [peace] out of our hands," said Hashem Baber of the ANP.

The province's government will send a contingent to meet with Mohammed and hear his complaints.

"We'll meet and talk and if they have an complaints, we'll try to push those away and solve the situation to get back to the peace deal," Baber said.

Critics of the cease-fire have called it a major concession by the Pakistani government in an attempt to hold off Taliban attacks.

Indeed, after the deal went into effect, Fazlullah proclaimed himself the Emir of Swat.

The central government has long exerted little control in the area, but it launched an intense military offensive in late July to flush out militants from areas of the North West Frontier Province

Sufi Mohammad was released from jail last year by Pakistani authorities after he agreed to cooperate with the government. He was detained in 2002 after recruiting thousands of fighters to battle U.S. forces in Afghanistan.

Last May, Pakistan's government announced it reached a peace deal with militants in Swat Valley.

In the months that followed, the Taliban seized control of the region and carried out a violent campaign against government officials, including local politicians.

The head of the secular Awami National Party -- which represents the region -- was forced to flee to Islamabad amid death threats from the Taliban.

The United States -- using unmanned drones -- has carried out several airstrikes inside Pakistan on suspected militant targets, including one on Wednesday that killed three suspected Taliban militants in the tribal region. Such incursions have infuriated many Pakistanis and their leaders.

Pakistan's previous leader, Gen. Pervez Musharraf, reached a cease-fire deal with militants in South Waziristan in 2006 which was widely blamed for giving al Qaeda and the Taliban a stronger foothold in the region.