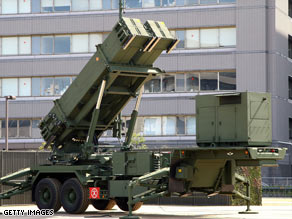 "If Japan recklessly 'intercepts' [North Korea's] satellite for peaceful purposes, the [Korean People's Army] will mercilessly deal deadly blows not only at the already deployed intercepting means but at major targets," KCNA reported.

Japan recently mobilized its missile defense system in response to the planned North Korean launch, Japanese officials said. The move, noteworthy for a country with a pacifist constitution, is aimed at shooting down any debris from the launch that might fall into Japanese territory.

U.S. Navy ships capable of shooting down ballistic missiles have also been moved to the Sea of Japan, a Navy spokesman said.

The threat of retaliation comes as North Korea has begun fueling its long-range rocket, according to a senior U.S. military official familiar with the latest U.S. intelligence on the matter.

The fueling signals that the country could be in the final stages of what North Korea has said will be the launch of a satellite into space as early as this weekend, the senior U.S. military official said Wednesday.

Other U.S. military officials said the top portion of the rocket was put on very recently, but satellite imagery shows a shroud over the stage preventing a direct view of what the stage looks like.

The officials said the satellite payload appears to have a "bulbous" cover, which could indicate there is a satellite loaded on it. Such a cover protects a satellite from damage in flight.

While the sources did not know for sure what the payload is, they did say there is no reason to doubt it is a satellite as indicated by North Korea.

Pyongyang has said it will conduct the launch sometime between April 4 and April 8. It's a launch that may violate a 2006 United Nations Security Council resolution.

Resolution 1718 "[d]emands" that North Korea "not conduct any further nuclear test or launch of a ballistic missile."

"It raises questions about their compliance with the Security Council Resolution 1718," U.S. Secretary of State Hillary Clinton said last week. "And if they persist and go forward, we will take it up in appropriate channels."

Pentagon officials worry less about the payload and more about the launch itself, saying any kind of launch will give the North Koreans valuable information about improving their ballistic missile program.

"I don't know anyone at a senior level in the American government who does not believe this technology is intended as a mask for the development of an intercontinental ballistic missile," U.S. Defense Secretary Robert Gates said on Sunday.

Defense analysts say the same rocket could be used to push a satellite into space or deliver a nuclear warhead.

Gates noted that while the United States believes it is North Korea's "long-term intent" to add a nuclear warhead to any such rocket, he "personally would be skeptical that they have the ability right now to do that."