(CNN) -- North Korea accused the United States and South Korea of sending spy planes on about 200 missions near the isolated communist nation ahead of a North Korea rocket launch scheduled for early April. 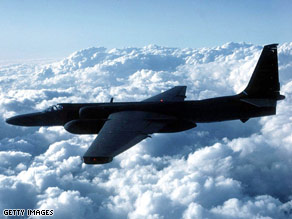 "The U.S. imperialists and the South Korean puppet military warmongers perpetrated intensive aerial espionage against the DPRK (North Korea) in March by massively mobilizing strategic and tactical reconnaissance planes with various missions," a military source said, according to a report from North Korea's state-run news service, KCNA, on Tuesday.

Pyongyang said the United States committed 110 cases of "aerial espionage and the South Korean puppet forces at least 80 cases," during March, KCNA reported. The source said the missions utilized six types of reconnaissance aircraft, including the high-altitude U-2 spy plane.

"The U.S. imperialist warmongers had better bear in mind that ... spy planes perpetrating espionage against the DPRK are within the range of its strikes."

The Pentagon was not immediately available to comment on the story.

The North Korean government says it will launch a commercial satellite atop a rocket sometime between April 4 and April 8. Satellite imagery taken on Sunday appears to show a rocket at the Musudan-ri launch site in northeastern North Korea.

Both the United States and Japan have mobilized missile defense systems ahead of the launch.

North Korea has threatened to start a war if Japan were to shoot down its rocket. Tokyo said the move is aimed at shooting down any debris from the launch that might fall into Japanese territory.

U.S. Navy ships capable of shooting down ballistic missiles have been moved to the Sea of Japan, a Navy spokesman said.

The United States generally has a number of ships equipped with powerful Aegis radar in the Sea of Japan because of North Korean threats to launch rockets. The ships are designed to track and, if needed, shoot down ballistic missiles.

The United States has no plans to shoot down the North Korean rocket, U.S. Secretary of State Hillary Clinton said last week, but will raise the issue with the U.N. Security Council if Pyongyang carries out a launch.