(CNN) -- The pilot and co-pilot aboard a FedEx cargo plane were killed when the plane burst into flames Monday while landing at Tokyo's Narita airport in Japan, airport and hospital officials said. 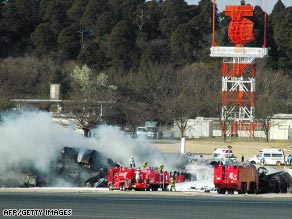 Smoke rises from a FedEx cargo plane that crash landed on the tarmac of the Narita International Airport, Tokyo.

Video from the landing showed the plane bouncing at least twice on the runway and veering left as it turned on its side before bursting into flames. The fire destroyed the aircraft, which was identified by FedEx as a McDonnell Douglas MD-11.

Japan's Ministry of Transport said it was the first fatal crash at Narita, which opened in 1978.

Strong winds may have played a role in the crash, said Masaru Fujisaki, an airport official.

According to observations at the airport, wind gusts were reported to be between 30 to 50 mph around the time if the crash.

Japan's Kyodo news agency reported that Narita firefighters had worked through the flaming wreckage to try to rescue two people believed to be the crew.

The news agency said the cargo plane was landing on Runway A, the longer of the two runways at Narita, a major international airport.

The National Transportation Safety Board in Washington said Sunday night it was sending a team to Japan to assist in the investigation of the crash.

CNN's Kyung Lah in Tokyo contributed to this report.

All About Japan • Tokyo • Transportation