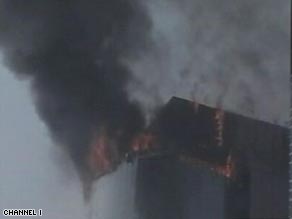 The fire engfuled the top of the Bashundhara City shopping mall in Dhaka.

Along with the seven deaths, 15 people were injured, said Mahabubor Rahman, deputy commissioner of police.

Authorities were also trying to determine what caused the blaze.

Though the fire had been extinguished, it was unclear how many people remained inside the 22-story complex.

"A lot of (people) could be (trapped) there," Rahman said, speaking by phone from Dhaka. Many people go to shopping areas Friday, which is a day off in Bangladesh.

Thousands of shoppers rushed out of the crowded Bashundhara City shopping complex in Dhaka, Bangladesh's capital, when the fire broke out on the top floors of the building.

The injuries are a result of both the fire and the rush to leave the building, a Shamarita hospital official said.

An estimated 10,000 people were in the building when the fire began about 1:45 p.m. (3:45 a.m. ET), Rahman said. Two people were evacuated by helicopter, including one who was injured, Rahman said.

Flames and plumes of smoke emanated from the building's upper levels, where the food court is located.

Some firefighting units initially had trouble reaching the blaze because their ladders did not go past the 13th floor, according to a local newspaper, The Daily Star. iReport.com: Fire seen from apartment rooftop

More than 25,000 people visit the shopping complex every day, according to developers. It opened five years ago and developers say it is the largest shopping mall in South Asia and the 12th largest in the world.

All About Dhaka • Bangladesh