(CNN) -- The body of a tourist was found off the coast of Thailand Tuesday, but six others remain missing after a ferry sank over the weekend near a popular diving destination, authorities said. 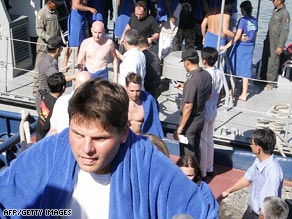 Survivors of the ferry sinking disembark the Thai police boat that rescued them.

The body is believed to be that of Austrian tourist Gabrielle Jetzinger, the Phuket Disaster Prevention and Mitigation Office told the Thai News Agency.

A Thai naval helicopter spotted the body floating face down about 12 nautical miles from Phuket's Promthep cape, and a Thai navy patrol retrieved the floating corpse.

The body has been sent to a government hospital for an autopsy, the agency reported.

Authorities are still searching for the five tourists and one crew member who remain missing. They are thought to be German, Austrian, Japanese, Swiss and one Thai crew member, the news agency said.

The tourist boat, the Choke Somboon 19, was taking passengers from the Similan Islands to Phuket -- an area popular with tourists from around the world.

Survivors included 15 international tourists and eight Thais, who were picked up by a rescue boat Monday morning.

Phuket and the Similan Islands are famous for their diving spots, attracting international tourists each year from November to May.