(CNN) -- The Chinese government has made life "hell on Earth" for Tibetans during the half-century since a failed uprising against its rule in 1959, the Dalai Lama said Tuesday. 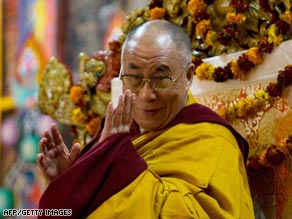 "These 50 years have brought untold suffering and destruction to the land and people of Tibet," the 73-year-old spiritual and political leader of Tibetan Buddhists said from exile in Dharamsala, India. "Today, the religion, culture, language and identity ... are nearing extinction; in short, the Tibetan people are regarded like criminals deserving to be put to death."

But Chinese officials blame the 50-year conflict on the Dalai Lama, accusing him of seeking an independent Tibet.

"The Dalai side still insists on establishing a so-called Greater Tibet on a quarter of China's territory," Chinese Foreign Minister Yang Jiechi told reporters last week. "They want to drive away the Chinese armed forces on Chinese territory and ask all non-Tibetans to relocate themselves, people who have long spend their lives in that part of the Chinese territory. You call this person a religious figure?"

Yang said China's "contradictions" with the Dalai Lama "is not about religious, human rights, ethnic or cultural issues but whether or not China will remain unified."

The Dalai Lama has repeatedly denied China's accusations. He says he seeks genuine autonomy for the region -- not independence -- and advocates the "Middle Way" of non-violence.

The Dalai Lama has won a Nobel Prize for advocating peace and is revered as an iconic figure overseas, but the Dalai Lama has never been allowed to return to Tibet, after fleeing his homeland in 1959. His emissaries have held sporadic talks with Chinese officials. But the talks, encouraged by the United States and other countries, have failed to break the impasse.

Watch an online address by the Dalai Lama »

"Looking back on 50 years in exile, we have witnessed many ups and downs," the Dalai Lama said. "However, the fact that the Tibet issue is alive and the international community is taking growing interest in it is indeed an achievement."

"I have no doubt that the justice of Tibet's cause will prevail, if we continue to tread the path of truth and non-violence," he said.

China has ruled Tibet since 1951, a year after sending troops to "liberate" the region from what it said was serfdom under the Dalai Lama. China has decreed that March 28 -- the day the Dalai Lama fled into exile in India -- is to be celebrated as "Serfs Emancipation Day."

Watch a recent history of Tibet »

In recent years, the region has seen an influx of Han Chinese and other ethnic groups, enticed by business and job opportunities. Although some Tibetans have benefited from the economic expansion, others have not. China's critics complain of "cultural genocide" and repression of religious freedom. Resentful Tibetans say they are often treated as second-class citizens.

Tension was high ahead of the 50th anniversary. China prohibited journalists from traveling into Tibet, but there are reports that extra security troops were deployed to the region to avert a repeat of last year's unrest.