(CNN) -- North Korea says it will retaliate if its "satellite" launch from its northeastern coast is intercepted, with the communist nation saying interference would "mean a war." The statement came as the North cut off communications with neighboring South Korea. 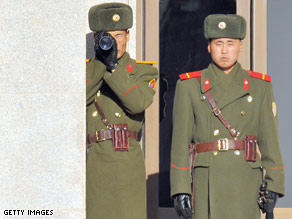 North Korean soldiers at the border village of Panmunjom on December 6, 2008.

"Shooting our satellite for peaceful purposes will precisely mean a war," a spokesman for the North Korean army said in a statement carried by the state-run Korean Central News Agency (KCNA).

U.S. and South Korean officials have said that North Korea appears to be preparing to test-fire its long-range missile, the Taepodong-2, under the guise of launching a satellite into space. The missile is thought to have an intended range of about 4,200 miles (6,700 kilometers), which -- if true -- could give it the capability of striking Alaska or Hawaii.

"We have said several times that the U.S.-South Korean military exercises are annual defensive exercises," Kim Ho-nyun, spokesman for South Korea's Ministry of Unification, said at a news briefing Monday.

"We again urge North Korea to maintain the agreed stance of mutual respect and to stop its verbal attacks and actions that are raising tensions on the Korean peninsula," Kim said.

The North said it has shut its borders to "any enemies" and has cut off "the north-south military communications in order to guarantee the security."

North Korea said the communications channel will remain closed until the 12-day joint exercise by South Korean and U.S. forces ends on March 20, according to South Korea's Yonhap news agency.

Kim said his government is urging North Korea "to immediately retract this measure and to allow the smooth flow of personnel and communication."

As of Monday morning, hundreds of South Koreans were kept from crossing the border to and from an industrial complex because North Korea cut off military communications, preventing the workers from getting clearance to return home, Kim said.

On Saturday, U.S. envoy Stephen Bosworth said he wants dialogue with North Korea, but he also spoke against North Korea's move to go forward with a launch, saying it would be "ill-advised."

All About North Korea • Kim Jong-il