(CNN) -- President Barack Obama will make his first overseas trip since taking office at the end of this month, visiting England, France, Germany and the Czech Republic, the White House said Thursday. 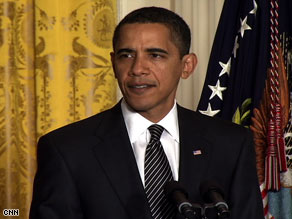 The trip is scheduled from March 31-April 5.

Obama, who will be joined by first lady Michelle Obama, will first visit London, where he will attend a summit with other world leaders.

He is to meet with French President Nicolas Sarkozy and German Chancellor Angela Merkel on April 3.

Obama will also attend NATO summit meetings in Strasbourg, France, and Kehl, Germany, then travel to Prague, Czech Republic, to meet with Czech leaders and leaders of other European Union nations.

His first trip outside the United States was to Canada last month.

All About Barack Obama • Michelle Obama