(CNN) -- Pakistani authorities released photos of two suspects Wednesday as they continued to hunt for the gunmen responsible for an attack on the Sri Lankan cricket team which left seven people dead. 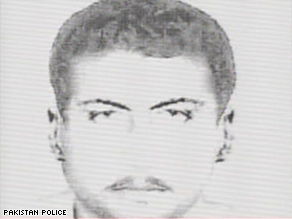 A Pakistan police sketch of one of the suspects.

Six police officers and a driver died in the attack. Investigators cannot yet say who was responsible but security camera footage was released showing the attackers fleeing.

The video apparently shows small groups of attackers -- up to three per group -- jogging up a street apparently carrying weapons and using motorbikes to escape.

Pakistan put up a 10 million rupee ($125,000) reward for information leading to the arrests of those behind the ambush on the visiting team's convoy as players and match officials made their way to Lahore's cricket stadium.

The worst injured were Tharanga Paranavitana and Thilan Samaraweera who suffered gunshot wounds to the chest and leg respectively. Neither man's injuries are believed to be life-threatening. Six other players were hurt by shrapnel and glass.

Read profiles of the wounded players »

Sri Lankan vice-captain Kumar Sangakkara told CNN that Paranavitana and Samaraweera were due to undergo surgery later Wednesday. He said Samaraweera still had a bullet in his leg.

Describing the attack in an interview with CNN, Sangakkara said he had feared Paranavitana had been fatally shot.

"I saw Tharanga Paranavitana get up and say 'I've been shot' and then he collapsed on the seat. I really thought he was seriously hurt or even dead," Sangakkara said.

Watch Sangakkara describe how he feared for his teammates' lives »

Sri Lanka's coach, Trevor Bayliss, told CNN he was thankful that none of his squad had been killed and paid tribute to the bus driver who managed to steer the vehicle to safety inside the stadium.

"He jumped back in his seat with all the bullets coming through the bus and he got us into the stadium. It wasn't until we got into the stadium that we could see how hurt some of the players were."

Watch footage of the gunmen staging their attack »

But match referee Chris Broad spoke critically Wednesday of the conduct of the Pakistani security forces during the attack, claiming a van detailed to protect the convoy had vanished.

"I am angry at the Pakistani security forces," Broad told a press conference on his return to Manchester. "We were promised high level security and in our hour of need that security vanished and they left us to be sitting ducks."

Pakistan's President Asif Ali Zardari has praised the police killed in the attack, saying the officers "rose to the occasion and laid down their lives to protect our Sri Lankan guests."

The brazen attack has sent shock waves across the cricket-crazy Indian subcontinent and raised fears about the future of the sport in Pakistan, which has been reeling from a string of terrorist attacks. iReport: Send us your videos, photos

Teams have long stayed away from Pakistan, concerned about the security situation in a country that is battling an escalating pro-Taliban insurgency.

Sangakkara said sporting organizations would have to not rethink security worldwide for all sports.

"I think this will probably be, though hopefully not, the start of a very scary time for international sportsmen," he said. "If it starts in the subcontinent with cricket it's hard to imagine it stopping there."

International Cricket Council President David Morgan said Tuesday that the attack in Lahore had been shocking.

"On many occasions we've been told that cricketers would never be targeted in Pakistan. And this morning's events have proved that to be quite incorrect," he said.

Watch ICC's reaction to the attack »

Sri Lanka -- a country enduring its own civil war with separatist rebels -- agreed in December to visit for a series of matches, after the Indian cricket team called off its tour following the deadly terror attacks in Mumbai in November. Indian authorities blamed those attacks on Pakistan-based militants.

Along with with India, Sri Lanka and Bangladesh, Pakistan had been due to stage matches in the Cricket World Cup in 2011 but cricket authorities have admitted the prospect of Pakistan playing any hosting role in that tournament now appears unlikely.

Ehsan Mani, a Pakistani cricket official who was president of the ICC from 2003 to 2006, said it would be years before international cricket would be played in Pakistan again and the said plans for the entire 2011 World Cup were in doubt because of recent violence in all four countries of the Indian subcontinent.

"I would be surprised if it does take place there (in Pakistan), but I've got a bigger concern," Mani told CNN. "I think the whole of the subcontinent is going to be under pressure."