BEIJING, China (CNN) -- When Christie's announced its plans to auction off two 18th-century bronze sculptures, the Chinese flatly said "no." 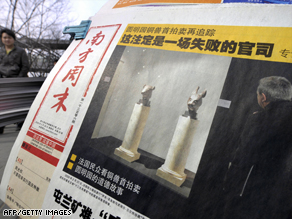 A Beijing news stand shows a report about the sale of the two bronze artifacts.

At the center of the dispute are two bronze sculptures, part of the late Yves Saint Laurent's private collection of arts and antiquities. The two 18th-century pieces -- fountainheads of a rabbit and a rat -- disappeared when French and British Allied forces pillaged Beijing's Old Summer Palace during the second Opium War in 1860.

China says the relics are part of its cultural heritage and should be returned.

Christie's, saying that legal ownership of the two pieces had been "clearly confirmed," defied Chinese objections. At a three-day auction in Paris, it sold the two sculptures for €14 million (US$17.92 million) each to two anonymous phone bidders.

The sale of the lost treasures has whipped up nationalistic passion among Chinese in and outside China.

Luo Zhewen, chairman of the Chinese Heritage Society said, "The biggest value of the bronze heads is that they are evidence of the crime committed by imperialists who invaded China. The despicable part the auction is not that it has breached international agreements, but that it is trading criminal evidence for a massive profit."

"It has broken the hearts of the 1.3 billion people of China," he said. "All these national treasures should be returned to their home countries. In future, these fountainheads will not belong to anybody and they should all be returned to the Summer Palace."

Chan says recovering national treasures will be the subject of a film of his next year.

In a survey on Sina.com, 89 percent of respondents opposed the auction "because (the relics) belong to China." Only 8.5 percent found it "understandable" because the auction is "legitimate" and "China could try to buy them back with high bids."

Many reacted with raw sentiments.

"Boycott French products!" wrote a person on the discussion forum of the government-run Global Times. "As the current financial crisis goes on, we have to let the French suffer."

In another posting in China Daily's chat room, a person wrote: "In desperate times, when they are in need of money, they can sell anything regardless!"

They said the episode offered a lesson for young Chinese: "When you are weak and subdued, no matter how loud you scream, they will walk over you!"

Watch more on the auction »

To many Chinese, the two bronze sculptures are painful reminders of what China-watchers call the "hundred years of humiliation syndrome," especially because the antiquities disappeared when a weak China was subjected to invasion and bullying by Western powers.

"This episode has become one of the saddest symbols of what we call 'national humiliation,'" said a history professor in Beijing.

This national humiliation syndrome at times resurfaces as a violent backlash whenever Chinese perceive a put-down of China. In 1999, for example, Chinese mobs besieged the U.S. Embassy in Beijing when U.S. missiles hit the Chinese Embassy in Belgrade and killed several Chinese staff members. Last year, some Chinese launched a campaign against the Western media in protest of what they called "negative, anti-China" reporting on the Olympic torch relay and the Tibet protests.

A debate is raging in China's mainstream media and cyberspace over China's lost treasures.

"We don't have to be so angry over losing historical relics," wrote a person in ifeng.com. "China has countless historical pieces lost overseas. We have to build many museums if we get all of them back. If we put them in foreign museums, people still can see China's ancient civilization and understand the history of crimes committed by foreign countries."

Others were more introspective.

"If the Red Guards smashed the Rabbit Head in the Old Summer Palace, whom will you cry to?" asks one person posting in the People's Daily Forum. "We Chinese have destroyed our own things more than the invaders, and the destruction is more extensive, lasting, and thorough."

Tao Duanfang, an international affairs commentator in Beijing, said that, though the bronze sculptures were national treasures, "what are really valuable are not these 'dead relics,' but China's economic progress, social stability and systemic progress."

Meantime, China has quickly moved to punish the auction house. Aiming to strike back where it could hurt most, China's State Administration of Cultural Heritage decreed tighter inspections on all cultural relics that Christie's seeks to bring in and out of China. That is meant to choke Christie's small but potentially big auction business in the country.

All About China • Yves Saint Laurent