Boat people to be sent back to Myanmar and uncertain fate

BANGKOK, Thailand (CNN) -- Scores of boat people who fled Myanmar and are now in Thailand are to be sent back despite human rights groups' concerns they could be tortured or killed upon return. 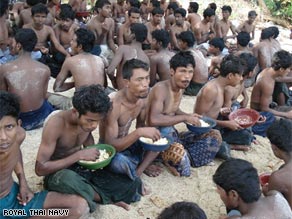 A photograph released by the Thai navy shows a group of men captured on December 12.

"They will have to be sent back, according to our law," Thailand's Prime Minister Abhisit Vejjajiva told CNN. "They are entering the country illegally. We do what they would do."

The 12 boys and 66 men who arrived are among thousands of members of the Rohingya minority who have fled Myanmar, formerly known as Burma, because of persecution and in search of a better life.

Many of them make it across a dangerous sea crossing in crowded boats to Thailand where they are housed in camps. But the Thai navy has been accused of forcing the boats back out to sea.

The 78 people targeted for deportation are being held in Ranong, in southern Thailand. Two remain in hospital and no date has been set for the forced repatriation, an immigration official said.

But human rights groups are concerned about what will happen to the men and boys when they return.

Watch how crowded boats were towed out to sea and abandoned »

"We know as a point of fact that there are Rohingya who've been returned to Myanmar who have ended up in prison," Benjamin Zawacki, from Amnesty International, said.

"The Myanmar government has interviewed these 78. Our fear is that if these people are sent back, the government has a record of who they are, where their families are," Zawacki said. "They may be tortured and or they could even be killed. That wouldn't be out of the question -- that is the real fear."

Sunai Phasuk, Thailand-Burma researcher for Human Rights Watch, said that the Rohingya had the "unenviable distinction of being the most blighted" people in Myanmar.

"Denied citizenship, subject to tight restrictions on movement, employment and religious freedoms, this Muslim minority have been the target of abuses by the Burmese military for decades," he said.

"Today they face serious risks of state violence and coercion, in part arising from preparations to build a pipeline through their region that will deliver offshore gas to China. Already reports are emerging of forced relocations and other abuses tied to gas exploitation."

The Myanmar government has not responded to CNN's request for an interview, but the plight of the Rohingya will be discussed at this weekend's ASEAN summit of South-East Asian nations, which the Myanmar prime minister and foreign minister are expected to attend. However, the man that effectively runs the country, Senior General Than Shwe, will not attend.

Thai Prime Minister Vejjajiva has stressed the need for regional cooperation to help solve the problem of the thousands of Rohingya fleeing Myanmar. His government views them as economic migrants rather than political refugees and said it cannot accommodate them in Thailand.

A recent CNN investigation found evidence that the Thai army was towing boatloads of Rohingya out to sea and cutting them adrift. Hundreds are thought to have died as a result.

Vejjajiva said the practice has stopped and insisted the Rohingya were given supplies of food and water. "We regret some of the incidents that have happened in the past. They are now being corrected," he said.