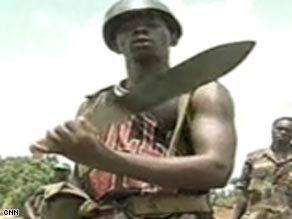 The RUF rebels were notorious for brutality.

The charges stemmed from a civil war in the diamond-rich West African nation that lasted more than 10 years and stood out for its viciousness, even on a continent that has suffered many vicious conflicts.

It led to tens of thousands of deaths and more than 2 million people fleeing their homes in the country of 6 million.

The RUF rebels were known for hacking off civilians' hands and feet during the war, which lasted from March 1991 until January 2002.

They were charged with "extermination, murder, rape, sexual slavery, forced marriages and physical violence" as well as enslaving civilians, mutilating people, and pillaging.

They were convicted on all counts except two specifically related to the kidnapping of international peacekeepers in May 2000.

Gbao was also found not guilty of two other charges related to an attack on peacekeepers, although Sesay and Kallon were convicted of those crimes.

"The RUF were renowned for leading one of the most brutal rebel movements in modern days. Everyone knows about the signature atrocity of limb amputation, but there was also horrific sexual violence, abductions, use of child soldiers, and forced marriages," she told CNN by phone from Senegal in West Africa.

She lived Sierra Leone from 1999 to 2004, documenting atrocities. "It was difficult to find someone who hadn't been a victim of or a witness to a war crime," she said.

Watch Jim Clancy's report on the battle for Sierra Leone »

Amnesty International also welcomed the convictions, but said much more needs to be done to bring hundreds of other perpetrators to justice.

The group called it a "positive, but still insufficient, step in the fight against impunity" in the country, and said "many others -- numbering perhaps in the several hundreds -- must be investigated in Sierra Leone."

Eight people have now been convicted of war crimes connected with the conflict -- some on the rebel's side and some on the government's.

The Special Court's mandate is to try only "those who bear greatest responsibility for atrocities committed in Sierra Leone."

Sesay, Kallon and Gbao had pleaded not guilty on all counts in a trial that lasted nearly five years.

They are due to be sentenced within a month. The Special Court cannot impose the death penalty.

The RUF seized most of Sierra Leone from the government and fought international and African peacekeepers. The capital, Freetown, was retaken by international forces in 2000.

The trial of the three former leaders was the last of three to be held at the Special Court, a unique joint project of Sierra Leone and the United Nations.

Former Liberian President Charles Taylor is on trial separately at an international court in The Hague for his role in the conflict. The prosecution rested in the Taylor case last month after a year of presenting its arguments.

The Leonardo DiCaprio movie "Blood Diamond" is set in Sierra Leone during the civil war. Despite the country's diamond wealth, 70 percent of the population lives below the poverty line.

In the days of the slave trade, the West African country was the departure point for thousands of captives bound for the Americas. Freetown was founded in 1787 as a home for repatriated former slaves.