(CNN) -- Nineteen political prisoners were released by the government of Myanmar over the weekend, the human rights group Amnesty International reported Tuesday. 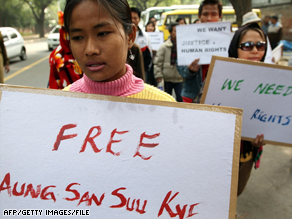 Protesters demand democracy for Myanmar at a demonstration in New Delhi, India earlier this month.

Among those released was Ma Khin Khin Leh, who was serving a life sentence because her husband, a student activist, had helped plan a protest demonstration in Bago in July 1999, according to Amnesty International USA's Web blog

Authorities prevented the demonstration from taking place, but took the woman and her three-year-old daughter into custody after failing to find her husband, Amnesty International said.

The child was released after five days but her mom, a 33-year-old school teacher, was sentenced to life in prison.

"Even by the normally harsh standards of 'justice' meted out by Myanmar's military government, the life sentence given to Ma Khin Khin Leh was extreme," the human rights organization said.

Myanmar's military rulers have been widely condemned for their alleged human rights abuses.

Pro-democracy leader and Nobel Peace Prize winner Aung San Suu Kyi has been confined in her home for 12 of the past 18 years. Her last house arrest began in 2003 and has been periodically renewed.

In October 2007, clashes erupted between pro-democracy demonstrators and government security forces. As many as 110 people are believed to have been killed in that crackdown, including 40 Buddhist monks.

The protests were sparked by a huge fuel price increase imposed by the military government, and quickly escalated. Myanmar's military junta said in mid-October that it had detained more than 2,900 people amid the clashes.

In September 2008, Amnesty International reported that Myanmar, also called Burma, had released seven dissidents, among them U Win Tin, a journalist and senior official in the opposition National League for Democracy who had been imprisoned for 19 years.