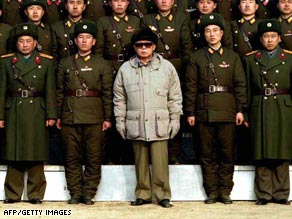 The paper, published after weeks of delay, calls the North's 1.2 million-strong military an "immediate and grave threat," according to Yonhap.

The report adds that the North has recently bolstered its naval forces, reinforcing submarines and developing new torpedoes, in addition to increasing its special forces training after reviewing U.S. military tactics in Iraq and Afghanistan.

Tension between Pyongyang and Seoul has increased in recent weeks, with North Korea announcing it would scrap peace agreements with the South, warning of a war on the Korean peninsula and threatening to test a missile capable of hitting the western United States.

U.S. and South Korean officials have said that North Korea appears to be preparing to test-fire its long-range missile, the Taepodong-2. Pyongyang tested one of the missiles in 2006, but it failed 40 seconds after launch.

The missile is thought to have an intended range of about 4,200 miles (6,700 kilometers), which if true, could give it the capability of striking Alaska or Hawaii.

North Korea has been involved in what is known as the six-party talks with the United States, Japan, Russia, South Korea and China, which is an effort to end the nation's nuclear program, which the U.S. says is linked to nuclear weapons.

U.S. Secretary of State Hillary Clinton, who returned from Asia on Sunday after her first overseas trip in the post, recently called North Korea's nuclear program "the most acute challenge to stability in northeast Asia."