ISLAMABAD, Pakistan (CNN) -- The Taliban and the government of North West Frontier Province in Pakistan have agreed to a permanent cease-fire in the nation's volatile Swat Valley, an official said. 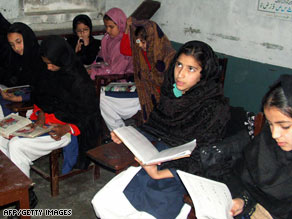 Girls study this week in Pakistan's Swat Valley. Education for girls is an issue in peace talks there.

Syed Mohammad Javed, commissioner for the Malakand region, which includes Swat Valley, told reporters in Mingora that the two parties had agreed to make permanent a 10-day cease-fire declared earlier this week.

Javed said the agreement meant boys schools will reopen on Monday and camps will be set up for Swat residents who have fled the fighting or whose homes had been destroyed.

The agreement comes as part of ongoing talks between Sufi Mohammad, a pro-Taliban cleric, and his son-in-law Maulana Fazlullah, the Taliban commander in Swat.

Taliban spokesman Muslim Khan confirmed the cease-fire. However, Fazlullah spoke on the radio Saturday, saying although the commissioner announced a permanent cease-fire, the Taliban will meet again after the 10-day truce expires and decide whether it will be extended.

Earlier this week, Pakistani government officials announced they had agreed with the Taliban to allow strict Islamic law, or Sharia, to be implemented in the entire Malakand Division.

It marked a major concession by the Pakistani government in its attempt to hold off Taliban militants who have terrorized the region with beheadings, kidnappings, and the destruction of girls' schools. The fighting has displaced nearly half of Swat's population, according to government sources.

Fazlullah said Saturday the implementation of sharia law was very important for peace. Like Javed, he said schools for boys will be opened soon. He said he was not against education of girls, but against the syllabus of their education.

The issue of education for girls was still under discussion, Javed said.

Nearly 8,000 people died as a result of militant-related violence in Pakistan in 2008, according to the Pakistan Institute of Peace Studies.

On Saturday, a NATO oil tanker truck was the target of a roadside bombing on its way to Afghanistan. One one person was killed, a local official said.

Two other people were wounded in the attack Saturday morning in the Landi Kotal area of Khyber Agency, one of seven semi-autonomous tribal agencies along the Afghan border, said the official, with the Khyber Agency political agent's office.