Arrests in India after hepatitis B kills 32 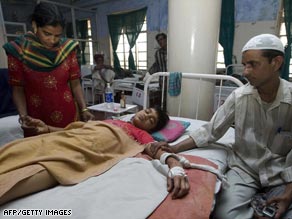 One of those arrested is being held for allegedly reusing injection syringes, Thennarasan said.

Health authorities have recorded 111 cases of hepatitis B infection in the district over the past two weeks, he added.

Health officials have launched an awareness campaign in the district, Thennarasan said this week.

Hepatitis B is a contagious liver disease resulting from infection with the hepatitis B virus, according to the U.S. Centers for Disease Control and Prevention.

It usually spreads through blood, semen, or other bodily fluids, often through sexual contact or sharing needles or syringes with an infected person, the CDC says.

The disease can range from a mild illness lasting a few weeks to a serious, chronic illness resulting in long-term health problems or death, according to the CDC.