KABUL, Afghanistan (CNN) -- Thirteen people, described by the U.S. military as "noncombatants," were killed in western Afghanistan earlier this week during a coalition operation, the military said Saturday. 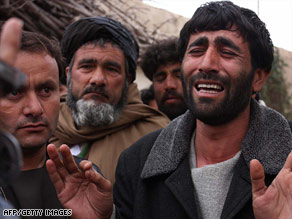 An Afghan man grieves for his brother after an attack this week by U.S.-led coalition forces.

"We expressed our deepest condolences to the survivors of the noncombatants who were killed during this operation," said Brig. Gen. Michael Ryan, U.S. Forces-Afghanistan.

The killings further inflame Afghans' anger and frustration over the killing of civilians in U.S.-led coalition and NATO operations. Many civilians also die in the crossfire between coalition forces and Taliban militants.

Afghan and coalition investigators and international observers this week were in Herat this week. Weapons and ammunition were found at the site of the operation and Afghan soldiers held shuras, or consultative bodies, with village leaders.

Ryan discussed the attack with senior police and army officials and with the governor of Herat.

"Our inquiry in Herat demonstrates how seriously we take our responsibility in conducting operations against militant targets and the occurrence of noncombatant casualties," Ryan said.

"Our concern is for the security of the Afghan people. To this end, we continually evaluate the operations we conduct during the course of our mission in Afghanistan and have agreed to coordinate our efforts jointly."

President Hamid Karzai raised the issue of civilian casualties during a meeting he had on Saturday with visiting U.S. House Speaker Nancy Pelosi.

A "recent consensus between the Afghan government and NATO, which gives more authority to the Afghan security forces during military operations, house searches and detention of suspected individuals, will help in reducing civilian casualties and bringing more effectiveness in the fight against terrorism," Karzai said.