JING SHI, China (CNN) -- Tang Hui and his family prospered as migrant workers during China's economic boom, earning $10,000 a year: enough to build a house, send a cousin to school and pay for his grandmother's medical bills. 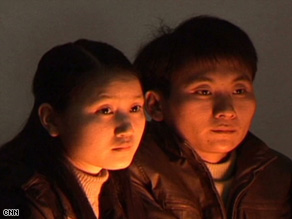 Tang Hui lost his manufacturing job in October just days after getting married.

But those good days are over. The family's cash earnings have evaporated, snatched away by a manufacturing crash cascading across China caused by falling global demand for its goods.

The nine people in the Tang family are facing an income of zero; their best hope to survive is to grow rice and raise pigs at home in the Sichuan Mountains.

"Farming is really hard. It needs a lot of hard labor," says 22-year-old Tang Hui, who lost his manufacturing job four months ago. "None of the young people want to farm nowadays. The income is extremely low."

See photos of the hard-scrabble life of Tang Hui »

A Chinese proverb says: "Going on the road to Sichuan is as hard as going to heaven." Isolated and mountainous, Sichuan is China's third most populous province; 60 percent of its 87 million residents are poor and live in the countryside, authorities say.

It became the nation's biggest source of the 130 million farmers who migrated into Chinese cities, especially in the south, to provide cheap labor for factories that churned out products, mainly for export to the United States. The province was also rocked last May by a massive earthquake that killed tens of thousands of people.

Five years ago, Tang Hui left for southern Guangdong province to work in a factory producing handbags and backpacks. He had to drop out of high school because his family was so poor.

There, he earned enough to stash away savings for his wedding. But last October, just days after he got married, his factory abruptly closed down. It was receiving no more orders from its American clients.

"I hope the government can help us during this crisis," he says. "I hope it won't be like this for too long. Now, there is not even enough money to celebrate the holidays."

At least he was able to spend the most important Chinese holiday of the year, the Spring Festival, at home in Qingbadong village.

The road uphill to the village was muddy and slippery. The winter rice fields were brown; the slopes were covered in winter fog. "In two, three months," Tang Hui says, "everything will be green and blooming."

And the festive mood -- the first time in six years the whole family celebrated the holiday together -- was short-lived.

Reality is never far away. Many of the villagers are unemployed. The Tang's next-door neighbors, a married couple, lost their jobs in a Guangdong shoe factory after working there for 16 years.

"A few months without jobs would be disastrous for us," Tang Hui frets.

Before they ventured out as migrants, the Tangs lived in a wooden shack. Now, they live in a two-story brick house, with 10 rooms, concrete floors, an open fire pit for cooking. Still, it has no running water and one outdoor latrine.

See where Sichuan province is located »

In the past months, about 70,000 factories nationwide have closed. Beijing official Chen Xiwen estimates about 20 million migrant workers have lost jobs. Tens of thousands of villages in the countryside depend on migrant workers' income.

Vice Minister of Commerce Jiang Zengwei says China is offering "a one-off subsidy of 100-150 yuan ($15 to $22) to 74 million low-income people ... for temporary relief." Still, it will take some time before such measures make a difference.

Some analysts have suggested that a "rural revolution" is imminent amid the economic turmoil. However, Wenran Jiang says such talk is premature. But he also says the central government must do more in the coming months.

"Many migrant workers have lived a very hard and simple life," he says. "They have some savings for a rainy day like this, so in the short-term they may be able to cope -- but if eight or 12 months later things continue to deteriorate, it could turn volatile."

Most farmers like the Tangs do not get social security. So villagers who lost factory jobs have few choices except go back to farming. But it is not easy.

Farming feeds people but brings little cash. Millions of the jobless are second-generation migrant workers, young people who grew up in cities.

To cope, China is creating training programs in the countryside. One of the pilot centers is in Chongqing municipality. Some 30,000 workers have so far taken classes in farming, farming machinery repairs, tailoring and other vocational skills. The trainees got a one-time incentive of about $45.

But the Tangs have never heard about such programs. When asked about the central government's plan to invest billions of dollars in countryside infrastructure as a part of a huge stimulus package, they expressed anger.

"The central government has good ideas and intentions, but the local officials often ignore them. The road in our village was built by the local government but we had to pay for it. Every family had to pay $100 or more. We get nothing from the government," says Hui's father, Tang Zhong Min.

In the evening, the family huddles around an open wood stove. The stove and a small portable electric heater are the only sources of warmth during the cold winter nights. A flickering fluorescent lightbulb barely lights the room.

Tang Hui's wife, Li Xiaochun, is 21 years old. She used to cut leather in a textile factory, and will soon head back to Guangdong with her husband to search for work.

Tang Hui then interrupts. "Of course, I also like it at home, but it is better in other places. Coming home is only good during the Spring Festival," he says.

Despite the uncertainty, they remain optimistic.

"We are young. There must be some factories still open out there. We should be OK to go out and do something," Li Xiaochun says.

But Tang Hui's mother is not so convinced. "Of course I am worried. How can they live without jobs, with no money so far away from home?" asks 46-year-old Hu Xiaoju. "But I will definitely go, too."

For the Tangs and millions of others in China, the road to Guangdong and employment may prove even more difficult then the proverbial road to Sichuan.