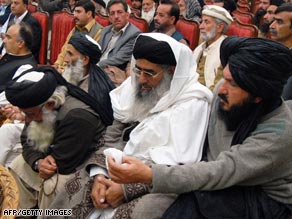 A pro-Taliban delegation attends a meeting with government officials in Peshawar, Pakistan, on Monday.

But now that the Pakistani government has recognized Taliban rule in the region in exchange for a temporary cease-fire, she said those hopes have been dashed.

She warned that the government's deal with the Taliban will have worldwide implications.

"The whole point is, if it's not contained to Swat, it's going to spill all over in Pakistan and the West also doesn't realize the seriousness of the situation," Bibi said. "Probably your next 9/11 is going to be from Swat."

This form of Islamic law is already in effect in parts of North West Frontier Province where the Taliban have control -- including Swat, which is located about 100 miles northwest of Islamabad.

Provincial minister Amir Haider Hoti said the people of the region want sharia which fills the "vacuum" left by a lack of access to Pakistan's judicial system. He said he hoped it would bring peace to the region, where Pakistani forces have battled militants aligned with the Taliban.

It is difficult to gauge the concerns of residents in Swat, because the government does not allow journalists into the area due to the ongoing military operation. Also, residents risk their lives if they openly criticize Taliban rule.

Bibi -- who used a false name to protect her identity -- told CNN that people in Swat do not support the Taliban's version of Islamic law. A strict Muslim herself, Bibi said she observes the teachings of the Quran, and the Taliban's interpretation of sharia has nothing to do with the Muslim religion.

Their oppression is also focused on women. The Taliban have destroyed dozens of girls' schools in the region. Bibi is living in a house in Islamabad with other women who have fled Taliban rule in Swat.

"For God's sake, in the West you must realize this: no education for women," she said. "You are going to destroy an entire generation."

She dismissed the government's peace deal as a concession to the Taliban. But she remains hopeful that she can return to the picturesque Swat Valley with her three children.

"I love Swat. It's because of my love and my passion for Swat that I am speaking."

All About Pakistan • The Taliban • Terrorism • Islam