(CNN) -- A former member of Cambodia's genocidal Khmer Rouge regime became the first from the ultra-Maoist movement to stand trial before a U.N.-backed tribunal Tuesday. 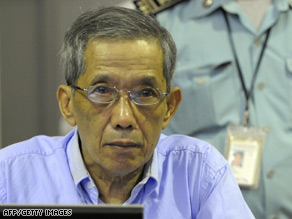 Kaing Guek Eav ran a prison where people are alleged to have been tortured and killed under the Khmer Rouge.

Kaing Guek Eav, known as Duch, faces charges that include crimes against humanity and grave breaches of the 1949 Geneva Convention during the regime's 1975-79 rule.

He is standing trial just outside the Cambodian capital, Phnom Penh, before the Extraordinary Chambers in the Courts of Cambodia, which is made up of Cambodian and international judges.

At least 1.7 million people -- nearly one-quarter of Cambodia's population -- died under the Khmer Rouge, from execution, disease, starvation and overwork, according to the Documentation Center of Cambodia.

More than 500 people -- including three survivors from the prison Duch ran -- filled the tribunal. About 50 people came from Kampong Thom province, the birthplace of now-dead Khmer Rouge leader Pol Pot.

"I have been waiting for this hearing for 30 years. I never thought that it would happen. Now I hope that the ECCC will bring justice to all Khmer Rouge victims. I lost three members of my family during the regime and I am a sufferer of the regime," Luch Bunthort, of Kampong Thom, told The Phnom Penh Post newspaper.

Watch profiles on the Khmer Rouge leaders on trial »

The initial hearing was primarily procedural and was likely to last a few days. No one -- Duch, witnesses or experts -- was expected to speak, though Duch was in the courtroom.

The substantive part of the trial begins in March and is expected to last three or four months. If convicted, Duch faces from five years to life in prison.

In addition to running the secretive Tuol Sleng prison -- known as S-21 -- Duch led the Santebal, which oversaw internal security and operating prison camps, according to the Cambodia Tribunal Monitor, a group of academic and nonprofit organizations.

Survivors of S-21 have told how inmates were routinely executed and tortured. Others were shackled with up to 50 others in stifling cells and kept on the brink of starvation .

The prison, preserved as a museum, still bears evidence of violence, including meticulously filed records and thousands of haunting photographs of those who passed through its doors.

Its presence in Phnom Penh, in addition to a towering monument containing the skulls of hundreds of victims, illustrate how many the scars of Khmer Rouge's brutality have yet to heal in the impoverished Southeast Asian nation.

Court spokesman Sambath Reach said many in the public have had a hard time believing the trial was happening.

Vann Nath, one of the few survivors of the prison run by Duch, told The Phnom Penh Post: "I couldn't sleep last night. I was dreaming about my time at S-21."

News of the trial's start made headlines in the country, and people were feeling "very numb," said Youk Chhang, head of the Documentation Center of Cambodia, where about 20 members of the public had gathered to watch the televised proceedings.

"It's important for Cambodian history, but it's not exciting the public because it's not a senior leader," he told CNN by telephone.

Still, there was relief that one of the regime's former leaders was facing justice.

"I think there is a feeling of, well you know, finally -- now it's finally happening after all these years of waiting -- hearing, fighting, negotiating," Youk Chhang said. "People have that kind of sense of relief that it's now moving. When I ask people around the center today, people say, 'Oh, it's about time.'"

"I think perhaps the expectation is not watching this, but watching later," he added. "What they want to see the most is the final judgment of the leaders."

One man at the center watching the proceedings, 37-year-old Quen Ieng, said through a translator that the start of the trial was a good step for Cambodia.

"It's for those who have died," said the carpenter, who survived the regime.

Four of the regime's other former leaders are also awaiting trial before the tribunal for war crimes and crimes against humanity.