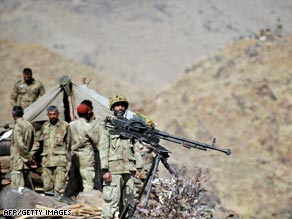 The Taliban says it has agreed a 10-day cease-fire with Pakistani forces in the Swat Valley.

The Taliban are holding talks with the North West Frontier Province's government in the town of Timagera in the province's Lower Dir district, he said. Taliban leader Sufi Mohammad is heading negotiations for the militants.

There was no immediate confirmation of the cease-fire from the Pakistani government.

Swat Valley was once Pakistan's biggest tourist destination until it was overrun by militants led by radical cleric Maulana Fazlullah. The valley boasted the country's only ski resort and was once a draw for trout-fishing enthusiasts.

It is believed to be the deepest advance by militants into Pakistan's settled areas -- meaning areas outside its tribal region along the border with Afghanistan.

The negotiations are the latest attempt by Pakistan's civilian government -- which took power last year -- to achieve peace through diplomacy in areas where Taliban and al Qaeda leaders are believed to have free rein.

Swat has been overrun by forces loyal to Maulana Fazlullah's banned hardline Islamic group, Tehreek Nifaz-e-Shariat Mohammadi (TNSM) which has allied itself with Taliban fighters. TNSM was once led by Sufi Mohammed, Fazlullah's father-in-law who is leading the latest negotiations. Sufi Mohammed was released from jail last year by Pakistani authorities after he agreed to cooperate with the government. He had been jailed in 2002 after recruiting thousands of fighters to battle U.S. forces in Afghanistan.

Last May, Pakistan's government announced it reached a peace deal with militants in Swat Valley. Analysts as well as critics within the establishment have described those talks as a failure that gave the Taliban time to regroup and gain more ground.

The Taliban have recently targeted local politicians, including the head of the Awami National Party -- which represents the region -- who was forced to flee to Islamabad.

Pakistan's previous military ruler, Gen. Pervez Musharraf, reached a cease-fire deal with militants in South Waziristan in 2006 which was widely blamed for giving al Qaeda and Taliban a stronger foothold in the region.