(CNN) -- The Pakistani government acknowledged Thursday that "some part of the conspiracy" behind the November attacks in India's financial capital, Mumbai, took place in Pakistan. 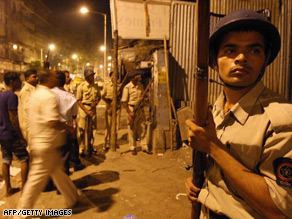 The coordinated attacks on hotels, hospitals and railway stations in Mumbai killed more than 160 people.

The comments by Rehman Malik -- the head of the Interior Ministry -- was Pakistan's first formal acknowledgment that Islamic militants trained in his country were behind the plot and was welcomed as a "positive development" by India's foreign minister.

Malik, speaking to reporters, said Pakistani authorities had charged eight people with providing the Mumbai attackers with cell phones and helping them reach the city's shore by boats from Pakistan. Among them is the mastermind, a man who lived in a rented apartment in the city of Karachi.

"The incident has happened in India and part of the conspiracy has been done in Pakistan and therefore (the charge) will be aiding terrorism," Malik said.

Of the eight people charged, six are in custody, including a person from Barcelona, Spain, who Malik said made payments for the attackers' cellphone communications.

Watch a report on Pakistan's admission regarding the attacks »

Malik said Pakistan would ask for Interpol assistance because the e-mail addresses and calling technology that the plotters used to interact with one another were registered in various countries, such as the United States and Italy.

"It worries me that somebody sitting in Pakistan and India were able to exploit the system in Italy and Spain to their benefit," he said.

Spanish police were not aware of the alleged link to Spain in the Mumbai attacks, but have contacted Pakistani authorities to seek more information, a Spanish Interior Ministry spokeswoman told CNN in Madrid Thursday.

But Spain has arrested several dozen Pakistan-born men in Barcelona in recent years, including 10 who were indicted last June for an alleged plot to carry out suicide attacks on Barcelona's mass transit system in January 2008, according to a court document viewed by CNN.

The Indian government has said the three-day siege in Mumbai in November was carried out by Lakshar-e-Tayyiba, a Pakistan-based outfit. Malik agreed that some of the suspects have been linked to the organization.

While Pakistan's admission was described as a "positive development" by Indian Foreign Minister Pranab Mukherjee, he said Islamabad still needed to take "credible steps" to destroy what it called terrorist infrastructure in that country.

Mukherjee said India would examine Pakistan's request for more information on the attacks and will share whatever it can with Islamabad.

The series of coordinated attacks on hotels, hospitals and railway stations in Mumbai killed more than 160 people, including many foreigners.

The accusations renewed tensions between South Asia's longtime rivals, who have fought three wars since independence and conducted tit-for-tat nuclear weapons tests in 1998.

Pakistani officials promised to cooperate with the investigation, but insisted that India show evidence supporting the claims.

Malik said the final report into the inquiry was pending and asked Indian authorities to help answer 30 questions, including providing the DNA of the suspects, that will help strengthen Pakistan's criminal case.

"We have a joint responsibility. We want to investigate. We just need help. And when we say 'help,' I am just signifying that we need more evidence," he said.

Previously, the only senior Pakistani official to acknowledge a Pakistani link to the attack was fired.

National Security Adviser Mahmud Ali Durrani was sacked on January 7 when he said that Mohammed Ajmal Kasab, the only surviving suspect from the attacks, had ties to Pakistan.

All About Pakistan • India • Mumbai