(CNN) -- President Hamid Karzai said that with a resurgent Taliban, a still-flourishing drug trade and a border with Pakistan believed to be home base for al Qaeda, Afghanistan can't afford for U.S. troops to leave any time soon. 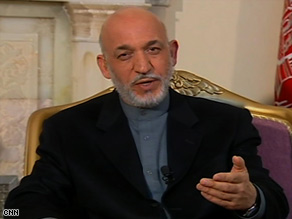 The task for U.S. forces in Afghanistan "is not over," Afghanistan's President Hamid Karzai says.

"Then, the United States can leave and, at that time, the Afghan people will give them plenty of flowers and gratitude and send them safely back home."

Karzai's comments come as President Barack Obama plans to send another 30,000 troops to fight what he's called the "central front in our enduring struggle against terrorism and extremism."

At the same time, Karzai said, the actions of troops in Afghanistan have turned some of the public against them.

Watch the interview with Karzai »

While he said he welcomes additional U.S. troops, Karzai suggested they need to work along the Afghan-Pakistan border and in the poppy fields that fuel a drug trade that threatens to turn the nation into a narco-state -- not in the villages where most Afghans live.

"We have traveled many years on. What should have happened early on didn't, unfortunately, happen," Karzai said. "Now, the country is not in the same mood as it was in 2002. And so any addition of troops must have a purposeful objective that the Afghan people would agree with."

The Obama administration is conducting several reviews of U.S. policy in Afghanistan, including a review by Gen. David Petraeus, the U.S. commander in the region. U.S. Defense Secretary Robert Gates has said the original mission in Afghanistan was "too broad" and needs to be more "realistic and focused" for the United States to succeed.

"If we set ourselves the objective of creating some sort of central Asian Valhalla over there, we will lose, because nobody in the world has that kind of time, patience and money," Gates said during a recent Senate hearing.

He called for concrete goals that can be reached in three to five years.

Speaking via satellite from Kabul, Karzai called former President George Bush "a great person," but said he can work with Obama despite the president's comments as a candidate that Karzai had "not gotten out of the bunker" to improve security and infrastructure in Afghanistan.

"President Obama is a great inspiration to the world," he said. "The people of America have proven that they can really be the light holders for change and the will of the people in the world.

Karzai also acknowledged corruption in the Afghan government, but defended the work he's done to combat it.

"Sure, corruption in the Afghan government is as much there as in any other Third World country," he said.

"Suddenly this country got so much money coming from the West, suddenly so many Afghans came from all over the world to participate. Suddenly there were projects -- suddenly there was this poverty that turned into some sort form of prosperity for this country," he said.

He said a government department has been created to deal with corruption and that corrupt judges, administrators and other officials are dismissed "daily" over corruption charges.

All About Hamid Karzai • Afghanistan • The Taliban • Barack Obama