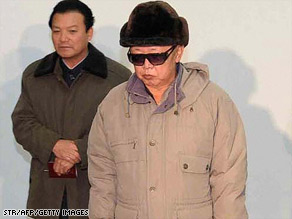 The photograph shows North Korea assembling telemetry equipment at the site -- equipment that would be needed for a launch to take place, the official said, adding that so far, there is no direct evidence of a missile being moved to the launch pad.

Telemetry equipment involves sophisticated electronics used to monitor missile launches. The official said if North Korea moves a missile to the area, it would be a cause for concern and could place the U.S. missile defense site in Alaska on alert.

"It would get folks spun up," the official said.

The last time equipment was assembled at the location, it resulted in the launch of a Taepodong-2 long-range ballistic missile in 2006.

The Taepodong-2 is believed to have a range of about 2,500 miles, making it capable of striking Alaska. In the 2006 test, the missile failed 40 seconds after launching.

Asked about the matter at a Tuesday press conference, Defense Secretary Robert Gates said: "Well, since the first time that they launched the missile, it flew for a few minutes before crashing, the range of the Taepodong-2 remains to be seen. So far, it's very short.

"I'm not going to get into intelligence reports, but it would be nice if North Korea would focus on getting positive messages across to the -- to its negotiating partners about verification and moving forward with the denuclearization."

The development also comes as Secretary of State Hillary Clinton prepares to head to Asia, where she will consult with U.S. allies about how to jump-start stalled nuclear talks with North Korea.

On Tuesday, days before the trip is scheduled to start, Clinton said the United States will continue six-party diplomacy aimed at ending North Korea's nuclear program.

She also warned Pyongyang about provocative action against its neighbors.

"We are hopeful that some of the behavior that we have seen coming from North Korea in the last few weeks is ... not a precursor of any action that would up the ante, or threaten the stability and peace and security of the neighbors in the region," Clinton told reporters.

Tension between South Korean and North Korea has increased in recent weeks, with North Korea announcing it will scrap peace agreements with the South, warning of a war on the Korean peninsula and threatening to test a missile capable of hitting the Western United States.

"I know of the continuing concern on the part of the other members of the six-party talks with respect to North Korea's attitude in the last weeks, and I'll be talking with our counterparts to determine the most effective way forward," Clinton said.