(CNN) -- Investigators in Australia believe some of the deadly wildfires ravaging dry southeastern bushland may have been set, a conclusion prompting Australia's prime minister to call such acts "mass murder." 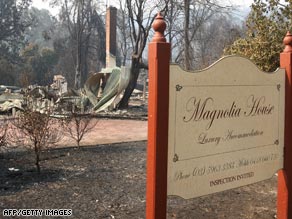 This hotel in Marysville was reduced to rubble.

State officials in Victoria have launched arson investigations into some of the blazes, which have killed at least 173 people, decimated massive spans of land and left thousands of people homeless.

Australian Prime Minister Kevin Rudd said Monday: "I think it's important that the nation braces itself for more bad news. This is a little horror which few of us anticipated."

News that some fires may have been deliberately set brought a note of disgust from the prime minister.

Watch the devastation brought to homes »

"What do you say about anyone like that?" Rudd said. "There's no words to describe it, other than it's mass murder."

Wildfires are an annual event in Australia, but the unprecedented carnage wrought by the fast-moving infernos, called the worst ever by police, have shaken and surprised the nation. This year, a combination of factors has made them especially intense: a drought, dry bush and one of the most powerful heat waves in memory. And, finally, officials think some of the fires might have been deliberately lit.

The number of dead is exceeding the toll of 75 in the Ash Wednesday fires of 1983, state police said, and the toll is expected to rise.

The blazes have so far spared major urban areas but have swept across nearly 200,000 hectares (500,000 acres) of bushland in Victoria, leading some firefighters and police to describe the destruction "as something of a holocaust," said state police inspector Phil Shepherd, who reported that two towns -- Marysville and Kinglake -- have been "completely wiped out."

Fire authorities reported nine large fires, including urgent threat messages for two of them. Around 4,500 firefighters are battling the blazes.

More than 3,000 people have been displaced. Victoria Premier John Brumby said more than 800 homes have burned and he expects the "devastating event" to push the death toll higher.

He said flames narrowly spared his parents, with fire stopping outside their house in the western part of the state.

As many as 400 Australian troops will be heading to affected areas to aid in rescue and recovery efforts, and resettlement services will be provided to displaced families, Rudd said. Firefighters on the scene have been working with other emergency service personnel to cut fire breaks while police erect roadblocks to evacuate residents, Shepherd said.

Victoria Police Chief Christine Nixon said investigators think "14 people were killed as a result of one particular fire that we believe was laid by arsonists." iReport.com: 'Thank God we were spared'

Victoria authorities have banned the use of barbecues and any equipment that might spark a fire. One man has been charged with violating the ban and of "conduct endangering life" in connection with a grass fire, and another has been charged with lighting fires in the neighboring state of New South Wales.

As darkness descended Monday, the flames continued to lick the night sky. Aerial views showed rivers of orange trickling in all directions amid the dense vegetation.

Police expect that some of the fires will burn for a number of days, while others may take weeks to completely extinguish.

Temperatures in parts of Melbourne reached 118 degrees Fahrenheit (48 degrees Celsius) in the past few weeks. Dozens of heat-related deaths have been reported. Officials were hoping for some help from milder weather moving in.