(CNN) -- Customs officials in Australia have cried fowl after searching a airline traveler -- and allegedly finding two live pigeons stuffed in his tights. 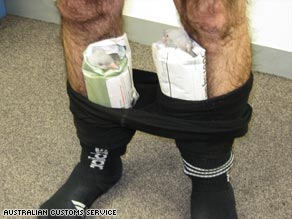 Customs officials in Australia allege that a man tried to smuggle pigeons hidden in his tights.

The 23-year-old man was stopped at Melbourne International Airport Sunday after arriving on a flight from Dubai, Australia's Customs and Border Protection service said in a statement posted on its Web site.

The service alleges that two eggs were found inside a multivitamin container carried by the passenger, who comes from Melbourne.

A further search revealed that he was wearing tights -- with a live bird stashed down each leg.

Photographs show the birds appear to have been rolled in newspaper and polythene with only their heads showing.

The images indicate that one bird was attached to each of the alleged smuggler's lower legs.

Customs officials also claim that plant seeds were found in the man's moneybelt and undeclared eggplant in his baggage.

"Wildlife smuggling is not only cruel to the animals involved, it poses a severe risk to the Australian environment and the health of the Australian community," said Richard Janeczko, Customs and Border Protection National Manager Investigations.

"It is important that people declare all animal and plant materials to Customs and Border Protection when they enter Australia," Janeczko added.