DAVOS, Switzerland (CNN) -- Pakistan's Prime Minister Yousuf Raza Gilani has called on the United States to halt its drone attacks against al Qaeda and Taliban fighters on Pakistani soil and warned that the missile strikes were fueling militarism in the country's troubled tribal border region. 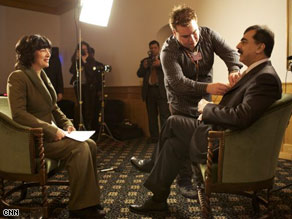 At least 17 people were killed in two drone strikes near the Afghan border on Friday, according to the Pakistani government, in the first attacks authorized since U.S. President Barack Obama took office last week.

Defense Secretary Robert Gates, who has remained in the post despite the change of government, said Tuesday that Pakistan was aware of U.S. strikes against militants within its territory -- but Gilani strenuously denied that any agreement existed between Islamabad and Washington.

"I want to put on record that we do not have any agreement between the government of the United States and the government of Pakistan," Gilani told CNN's Christiane Amanpour in an interview at the World Economic Forum.

"If there are any drone attacks these would be counter-productive... Therefore we ask that if they have credible and actionable information, they share it with our intelligence agencies and we will take action ourselves."

Gilani said that ongoing Pakistani army operations against the militants were backed by the region's local population, but warned that missile attacks jeopardized tribal support for the government and urged President Obama to "respect the sovereignty of Pakistan."

"We are successfully isolating the militants from the local tribes," said Gilani. "But when there is one drone attack then you get them united. There is a lot of anti-American sentiment growing in those areas."

Dismissing western skepticism of his government's commitment to fighting Islamic militancy on its soil, Gilani said the conflict was fueled by fighters from Chechnya, Uzbekistan and the Middle East spilling over the border from Afghanistan, rather than indigenous militancy.

He also said NATO's continuing struggle to establish law and order in Afghanistan proved that neighboring regions that had been dragged into the conflict could not be pacified so easily, and rejected suggestions that U.S. military aid should be performance-related as "counter-productive."

"We have the ability and we have even the will but we don't have the capacity," he told CNN.

"The world is focusing on Afghanistan; they have the most sophisticated weapons in the world -- and our poor people they are fighting without any arms or ammunition. NATO is having a very, very tough time in Afghanistan. We are also fighting a very tough fight."

Gilani's remarks followed an earlier statement from Islamabad in which his government said there was "no understanding" between Pakistan and the U.S. over the ongoing missile campaign and called for "closer cooperation at the operational level" between U.S. and Pakistani forces.

"As far as al Qaeda is concerned, Pakistan has done more than any other country. We look forward to working closely with the new U.S. administration on all issues, including in the fight against terrorism," a spokesman said.