(CNN) -- The Sri Lankan government said Thursday it has made more inroads into the remaining territory held by ethnic Tamil Tiger rebels after troops seized their command center in the north of the country. 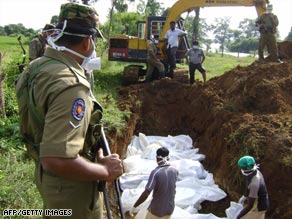 The defense ministry's announcement, also reported by the country's Lankapuvath national news agency, could not be independently verified.

The defense ministry said rebels were firing at and killing civilians who were trying to flee the fighting.

"In the face of humiliating defeat, LTTE terrorists are tailoring a civilian tragedy," it said on its Web site.

The LTTE, or the Liberation Tigers of Tamil Eelam, are commonly known as the Tamil Tigers. They have fought for an independent homeland for the country's Tamil minority since 1983 in a civil war has left more than 65,000 people dead.

In recent days, the military has made significant progress in its campaign to recapture rebel strongholds.

Earlier this month, troops regained control of the northern town of Elephant Pass, the point at which mainland Sri Lanka links to the northern Jaffna peninsula. It had been in rebel hands for more than nine years.

The re-capture enabled the government to use a highway linking the mainland to the peninsula to move troops and supplies. Previously, it was done by air and sea.