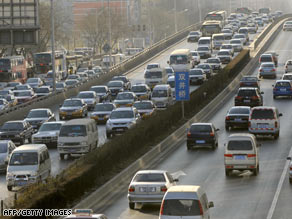 Commuters drive along a road in downtown Beijing, China, on Thursday.

The Chinese government revised its growth figures for 2007 from 11.9 percent to 13 percent this week, bringing its estimated gross domestic product to $3.4 trillion -- about 3 percent larger than Germany's $3.3 trillion for the same year, based on World Bank estimates. Beijing is expected to release its 2008 GDP figures next week.

Although the world's top economies, the United States and Japan, are in recession, the most pessimistic estimates for China's growth in upcoming years runs about 5 percent. That could allow China's GDP to overtake Japan's, currently $4.3 trillion, within a few years.

The World Bank's estimate of China's economic growth is about 7.5 percent. But China has seen a sharp decline in exports in November and December as other major economies struggle, and the bank's analysts say rates below 6 percent could worsen the rest of the world's slump.

Watch how China was able to overtake Germany »

And Michael Santoro, author of the 2008 book "China 2020," said China will have other problems to overcome if it is to maintain its rapid expansion.

"It's no longer sufficient for China to become a manufacturer of sneakers or toys and the like," Santoro said. "Now they're looking to become players in the area of pharmaceuticals and foods and other high value-added products, where safety and quality are important characteristics for improving in the global economy."

China recently announced a $600 billion economic stimulus package, and its State Council on Wednesday laid out a new plan to boost its steel and auto industries -- including about $1.5 billion to develop alternative-fuel vehicles.

CNN's John Vause and Judy Kwon contributed to this report.