The world according to Vivienne Westwood

By Dean Irvine
For CNN 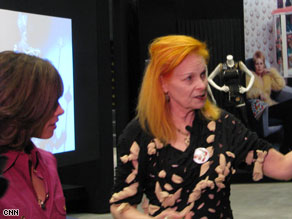 Presenting a world of fashion to Anjali Rao, Vivienne Westwood was happiest to talk about practically anything else.

In Hong Kong for the opening of a traveling retrospective of her work, she arrived at the exhibition, her characteristic red hair contrasting with her pale complexion, with a small entourage of suitably fashionable and vaguely mysterious looking characters in tow.

As she folded herself into a chair for the Talk Asia interview, the entourage settled in the background -- some blending in with the grand designs of the exhibition, others, like Carlo, a small, bald man wearing dark glasses, providing more of a contrast.

Things didn't begin as well as they could have. Wearing a splendid pair of high heels and a black wrap dress with cuts and slashes entwined with what looked to an untutored eye to be medical bandages, Dame Vivienne found the large, soft-looking armchair too hard and uncomfortable.

It was duly swapped for a small plastic chair that looked hard and uncomfortable, but was more to her liking, taking to it like a fakir to a bed of nails.

More comfortable then but not quite settled, the first question was greeted by a long pause and then a moment of mild panic for the production crew as she shut her eyes and put her head in her hands. But it wasn't the question apparently, it was the too-cold and too-noisy air conditioning that wasn't right.

"I'm very sensitive to noise," she said in her Yorkshire accent, before apologizing for having to change things about before she could start properly. "I'm alright when I get going," she said with a reassuring smile.

Softly spoken, many answers were peppered with pauses, hmms and rhetorical "what am I trying says," which often made it seem as if she'd never been asked some of the questions before. More likely was that she was trying to approach them in a new way, making a different cut from an old pattern.

"I've got a terrible memory; it's probably because I'm always concentrating on what I'm doing now," she said in some way to explain her individual interview style, but probably revealed as much about how she's managed to be so consistently imaginative and inventive over the years.

Carlo from the entourage was eventually banished from her eyeline after one too many smirks and giggles at the mention of her former husband and partner in punk, Malcolm McLaren.

She warmed most to the interview when she had the opportunity to express her views on everything apart from fashion, from how lucky the British are to have Prince Charles to the state of the media: "It's all boring. Journalists are usually quite jealous people, especially of intellectuals who are supposed to be in fashion."

At one point a few "anyways" and "what am I trying to says" led on to an enthusiastic extolling of a particular Chinese painting as the high point of human existence before things went on to how art hasn't moved on since 17th century Dutch paintings and how young people today don't have any imagination.

As for her relationship with her partner Andreas Kronthaler, who wasn't part of the day's entourage: "He couldn't stand it if I was talking like this at home now, he'd be off in the kitchen or doing something else. But he's the most stimulating person I know."

While she was happy to talk about individual pieces of clothing at the exhibition, she was generally more content to pontificate than talk about punk, proving that in herself she was truer to the ethos of the term than the fashion style she helped popularize.