COLOMBO, Sri Lanka (CNN) -- A suicide bomber on a motorcycle blew himself up outside air force headquarters Friday in Colombo, killing two air force police officers and a member of the bomb-disposal unit, authorities said. 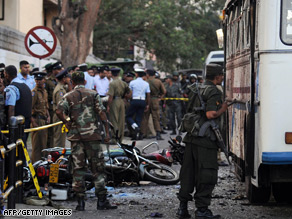 Police and army officials at the site of the suicide bombing in Sri Lanka's capital Colombo.

The bombing occurred about one hour after President Mahinda Rajapaksa urged the Tamil Tigers to lay down their arms and end a quarter-century of civil war. Before he made that request, government troops retook the separatists' former capital, Kilinochchi.

The bombing wounded 30 people, three of them critically, authorities said. Initial reports indicate the bomber triggered explosives strapped to his chest when air force personnel tried to stop him for a search.

In a televised statement Friday evening, Rajapaksa called the recapture of Kilinochchi "a victory against separatism."

Rajapaksa's announcement was met with fireworks in Colombo, and Friday's news prompted celebrations in other cities as well.

The Tamil Tigers ran a parallel administration from Kilinochchi with their own police force, courts, prisons and taxes, and they had declared government plans to retake the city a "daydream." But after Sri Lanka launched a new offensive against the rebels in the fall, the insurgents moved their nerve center and logistics bases to Mullaitivu, on the northeastern coast.

There was no immediate response from the group to Friday's news.

Sri Lankan troops have been on the outskirts of Kilinochchi, about 580 km (360 miles) north of Colombo, for more than a month. They took a key highway junction and a town outside the city Thursday.