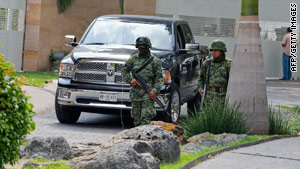 Mexico City, Mexico (CNN) -- A medical examiner and three employees were suspended Monday pending the outcome of an inquiry into whether they meddled with the body of a slain Mexican drug kingpin, a state prosecutor's office official told CNN.

Arturo Beltran Leyva, a drug trafficker known as "the boss of bosses," was killed on December 16 when Mexican navy commandos stormed a luxury condo in Cuernavaca, Mexico, where he was staying. Photos from the scene showed Beltran Leyva's body splayed on the ground, with his pants pulled down past his knees and his T-shirt lifted up to his shoulders. The body was covered in blood-stained $100 bills and Mexican banknotes.

The images created controversy in Mexico because it appeared that he intentionally had been placed in that position, in effect altering the scene.

The official, who asked not to be named because he was not authorized to talk publicly about the case, said the four state employees will remain suspended until an investigation is complete. Two forensic photographers are also subjects in the inquiry but were not suspended, the source said.

The end of Beltran Leyva's reign over the cartel of the same name was hailed by Mexico and the United States as a major victory for Mexican President Felipe Calderon's offensive against drug cartels. The offensive has claimed more than 7,600 lives this year, according to a tally by the El Universal newspaper.

Six other cartel members and one naval petty officer also died in the raid that killed Beltran Leyva.

Four members of the slain officer's family were killed earlier this month, apparently in retaliation.

The Beltran Leyva cartel is known for air transportation expertise.

A U.S. Drug Enforcement Administration estimate from two years ago said the group smuggled 300 to 400 kilograms of cocaine monthly into the United States. The group is also known to smuggle black tar heroin.