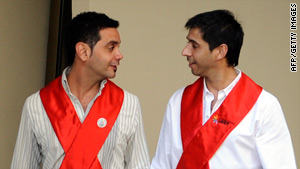 Buenos Aires, Argentina (CNN) -- Less than one month after a Buenos Aires court derailed the marriage of Alex Freyre and Jose Maria di Bello, the couple wed Monday at the southern tip of Argentina, making it the first same-sex marriage in Latin America.

"As a couple, we dreamed of marrying for a long time," Freyre told the state-run Telam news agency.

Their marriage was hailed as a victory by gay rights groups in Argentina, though it was unknown whether the legality of their marriage would face any challenges.

After a legal battle earlier this year, a court in the capital, Buenos Aires, ruled that a ban on same-sex marriage was illegal and ordered the proper authorities to grant the couple a marriage license if they applied for one.

On the eve of their December 1 wedding, however, another court filed an injunction, putting the brakes on the nuptials.

In Argentina, the issue of same-sex marriage is decided on the local and state level.

So Freyre and di Bello went to the southernmost state of Tierra del Fuego, where a pro-gay marriage governor welcomed the event, Telam reported.

Although the federal government could not directly intervene, Argentina's National Institute Against Xenophobia and Racism (INADI) helped find a friendly jurisdiction where the couple could have their wedding, the institute's president, Claudio Morgado, told Telam.

Morgado was even a witness at the ceremony.

"This is the purpose of INADI, to safeguard the rights of citizens who do not fully enjoy these rights," Morgado said, according to the state-run news agency.

The original ruling against a ban on gay marriage was made on November 10 by Buenos Aires trial-level judge Gabriela Seijas. Her decision applied only to Buenos Aires.

Buenos Aires Mayor Mauricio Macri said after the ruling that his government would not appeal the decision, but a second trial judge filed an injunction until the issue could be considered further.