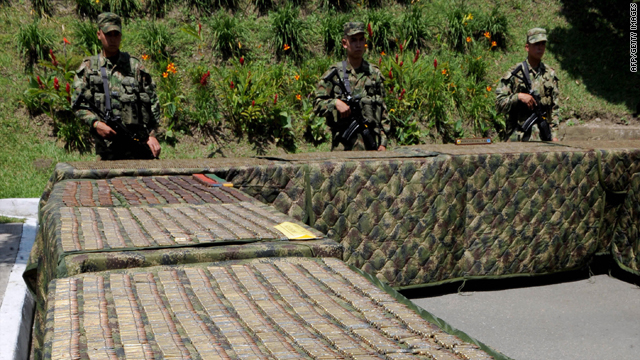 Colombian soldiers stand next to tables with thousands of seized cartridges put on display on May 6, 2009, in Medellin, Antioquia Department, which were seized from FARC leftist guerrillas.
STORY HIGHLIGHTS
RELATED TOPICS

(CNN) -- The body of Luis Francisco Cuellar Carvajal, governor of the department of Caqueta, Colombia, was discovered Tuesday not far from where he was kidnapped the night before, government spokesperson Wilmer Rua said.

The governor's body was found by Colombian troops in an area close to his home, where he was kidnapped Monday night, he said. One of his bodyguards was killed in the high-profile abduction, and two other officers were injured

The kidnapping was carried out by the Revolutionary Armed Forces of Colombia, or FARC by its Spanish initials, Colombian Defense Minister Gabriel Silva said earlier Tuesday.

Uribe had ordered the military to find and rescue Cuellar Carvajal from the rebel group.

The Marxist insurgent group has been fighting the Colombian government for more than 45 years.

This is the fifth time the governor has been kidnapped, Rua said. This time, he was taken late at night, about two hours before his 69th birthday.

Uribe said that members of the FARC kidnapped Cuellar Carvajal at about 10 p.m. Monday. Authorities ordered the city on lockdown in an attempt to keep the kidnappers from carrying out their plan, Uribe said.

Instead, the the guerrillas burned the vehicle that authorities believe was used in the kidnapping, and then slit the governor's throat to avoid leaving evidence that may have been traced from a firearm to the killers, Uribe said.

The president offered a $1 billion peso reward (U.S. $485,000) for information leading to the arrests of those responsible.