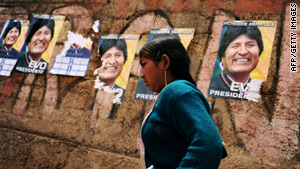 A woman walks past posters urging the re-election of Bolivian President Evo Morales on the eve of voting.
STORY HIGHLIGHTS
RELATED TOPICS

With 91 percent of votes tallied, Morales' Movement for Socialism party won 62 percent of the vote, according to exit polls. The conservative Progress Plan for Bolivia party came in second with 23 percent, according to preliminary numbers.

The resounding victory was not unexpected, as Morales, the country's first president of indigenous descent, was leading in pre-election polls and was widely expected to win.

The victory "shows that it is possible to change Bolivia based on the vote of the Bolivian people," Morales said in a victory speech Sunday night.

The large margin and possible majorities in congress and the senate are an embrace of his government's policies, Morales said.

The resounding win "compels me to accelerate these changes," he said.

The leftist leader, an ally of Venezuelan President Hugo Chavez, said earlier Sunday that he hoped for a record-breaking turnout.

"I urge all the patriots to go vote at the electoral tables so that Bolivia beats not just the national, but the international participation record, near 90 percent," Morales told reporters Sunday.

Morales nationalized important sectors in Bolivia, including mining. The move for the state to protect the country's natural resources and increased social programs have made Morales popular among the nation's large population of poor.

A referendum earlier this year changed the constitution to allow a president to run for re-election.

In a speech Sunday night, Reyes Villa talked about the future, though he did not explicitly concede the election.

"The polarization of the country continues," he said, referring not only to the political right and left but to the fractured opposition.

The various parties who ran against the current government should put national interest ahead of personal interest, Reyes Villa said.

"We must keep fighting to strengthen our democracy," he said.

Thousands of police and hundreds of international observers were deployed across Bolivia.

No major incidents were immediately reported.

"The guy is popular and it's all constructed on this anti-American populist rhetoric, which is very politically popular."

In addition to president, Bolivians also voted for a vice president, 130 congressmen and 36 senators.

CNN's Arthur Brice and journalist Gloria Carrasco contributed to this report for CNN.