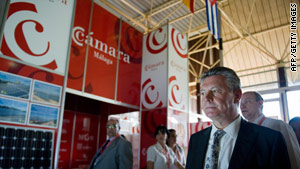 An international trade fair is on this week in Havana, Cuba.
STORY HIGHLIGHTS

If he has his way, those products soon will be available at supermarkets and beach resorts on the communist island.

"This is one of the things people are going to pay premium for," Waltzer said, "especially the tourists that have the dollars. It's going to be a phenomenal product."

This week, dozens of Americans are in Havana, peddling their wares at an international trade fair: apples, pears, grapes, raisins, nuts out of California.

U.S.-Cuba relations appear to be thawing.

In Havana, billboards depicting the U.S. president as Adolf Hitler have disappeared. In Washington, President Obama has lifted restrictions on Cuban-American travel and money transfers.

The new political climate has prompted companies such as Chicago Foods to come to Havana's trade fair for the first time. They're hoping to break into the little-known market and go home with a contract.

Despite a trade embargo imposed against Cuba in 1962, the United States is the No. 1 supplier of food to that country and has been for more than five years. A law passed in 2000 allows the United States to export agricultural products and medicine.

But this year, the global economic crisis is taking its toll.

"Cuba has not been an exception," said Rodrigo Malmierca Diaz, minister of foreign trade and investment. "At the end of the third quarter in 2009, our trade fell by 36 percent."

The country is slashing imports of U.S. food by one-third, which means some vendors will go home empty-handed.

But vendors are betting U.S.-Cuba relations will only get better. They said they're also hoping the next step could be bills in the U.S. Congress that would eliminate restrictions on all Americans traveling to Cuba.

"We're in this for the long haul as well," said Paul Johnson of Chicago Foods. "Like I said before, we're thinking about today as well as tomorrow."

A tomorrow that would have U.S. tourists sipping American beer on Cuban beaches.