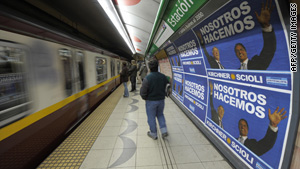 The Buenos Aires metro system was the first of its kind in South America. The first station opened in 1913.
STORY HIGHLIGHTS
RELATED TOPICS

Teachers and doctors in Buenos Aires went on strike Wednesday and are scheduled to go back to work Friday, the government-run Telam news agency and other outlets reported. Subway workers will go on strike Thursday night for a few hours, they said.

This is the fourth work stoppage in the past six months for doctors. Only emergency cases are being treated.

The doctors are not only seeking better salaries, but also improvements to the public health system.

They are protesting "the lack of money in the public system, the possibility that the health budget will be reduced by 500 million pesos (about $130 million), the lack of professionals, the lack of labor to solve the problems in Argentina's public health," said Alicia Kobylarz of the Federal Syndicate of Health Workers.

The nation's public hospitals treat the poor and needy. Health professionals want the government to employ more doctors to meet rising patient loads and an increase in diseases and epidemics such as H1N1 flu and dengue fever.

The hospitals depend on funding from the provinces, leading to major differences in each area's needs and what local health care facilities can offer.

The current health minister, Juan Manzur, said next year's health budget will have an increase of more than 15 percent, greater than the national budget, which will have a 12.4 percent increase.

Teachers also want greater pay and announced Thursday they would go back on strike Tuesday because of failed talks with Buenos Aires Education Director Mario Oporto. The teachers say they want their raises by year's end.

"The province's posture is very clear: There won't be raises in 2009 because there already have been," Oporto told a radio station, according to Telam. "We're sorry about the work stoppage, and we are ready to keep working. This time we are very firm: There will be no raises in 2009."

Daniel Scioli, governor of Buenos Aires Province, said public education "is our top priority" but also emphasized there would be no raises this year, the news agency reported.

Teachers' union leaders complained Thursday that government officials went to schools Wednesday to find out which teachers were there and which had joined the work stoppage, Telam said.

Subway workers in Buenos Aires announced they will walk off the job at 7 p.m. Thursday. They, too, want pay raises.

Educators also are on strike in neighboring Chile, where professors say they are owed a "historic debt." The indefinite strike entered its fourth day Thursday and negotiations are scheduled to resume Friday.

Jaime Gajardo, president of Chile's College of Professors, told a local TV station there has been improvement in negotiations with the government and the talks could advance noticeably in the next few days.

Pablo Zalaquett, the mayor of Santiago, the capital of Chile, said the two sides are closer on a pay bonus the professors want.