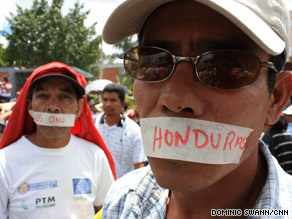 Pro-Zelaya demonstrators take to the streets Monday in Tegucigalpa, Honduras.

The controversy over the decree, which limits constitutional rights such as freedoms of expression, travel and public congregation, became the latest obstacle toward a resolution between Micheletti and deposed President Jose Manuel Zelaya.

The decree was a response to the unexpected return of Zelaya to Honduras. He has been holed up inside the Brazilian embassy in the Honduran capital for more than one week.

Arias, a mediator between the two sides, said he spoke with Micheletti on the phone about the issue.

"If the decree is repealed, it would be a very good thing," Arias said.

The measure had not been repealed as of Tuesday night, but Micheletti has said that he would listen to the wishes of the other branches of power.

"Honduras risks spiraling into a state of lawlessness, where police and military act with no regard for human rights or the rule of law," said Susan Lee, Americas Director at Amnesty International, in a statement. "Roberto Micheletti must urgently rescind the decree and send clear instructions to the security forces to respect human rights in all circumstances and at all times."

In another development, the head of the armed forces, Romeo Vasquez, said that a solution to the crisis would come soon, CNN en Español reported. But the general gave no details of how that solution would come.

Meanwhile, Honduras said a delegation from the Organization of American States can visit Friday, five days after a group of OAS representatives looking to help the country end its political turmoil was turned away.

The OAS officials were not allowed in although they had been invited, the Honduran government said in a statement late Monday, because they arrived too soon. The de facto government was carrying on "conversations between the political actors, local business and religious leaders" and was not ready for the visitors, the statement said.

The OAS held an emergency meeting Monday and issued its own statement saying the organization "deplored" Honduras' refusal to allow the diplomats into the country.

The 45-day decree announced Sunday night forbids any unauthorized public gatherings, allows officials to make arrests without a judicial order and lets the government close down news media that threaten "peace and order."

"This decision was made because (Zelaya) was calling for insurrection ... but I'm going to listen to the other powers of the state and we're going to make the most wise decision in the interests of Honduras," Micheletti said, according to the newspaper La Prensa.

Zelaya, who was ousted in a June 28 military-led coup, has called for talks with Micheletti, who has vowed that the former president will never regain his post. Micheletti also has said Zelaya would be arrested if he leaves the Brazilian embassy here in the nation's capital.

The crack-down under the emergency order was swift Monday as Honduran police and military seized the Canal 36 TV station and Radio Globo stations.