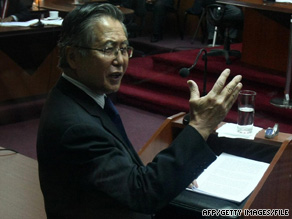 Alberto Fujimori speaks in court in Lima, Peru, in April.

Monday's criminal trial was the fourth and final that Fujimori faced since being extradited to Peru from Chile in 2007.

Fujimori, who was president from 1990 to 2000, will be sentenced Wednesday.

Prosecutors had planned to parade about 60 witnesses, including former congressmen, authors and journalists, to testify about the bribery and wiretaps.

But with a short "I agree" to the judges, Fujimori averted the witnesses, Andina reported.

Fujimori is a controversial figure in Peru. He is credited with restoring economic stability to the country and defeating the Shining Path guerillas, who carried out terrorist attacks. But he had an authoritarian streak that led to accusations of human rights abuses and corruption.

According to prosecutors, in 1990, Fujimori and his then-spy chief, Vladimiro Montesinos, used public funds to set up surveillance centers to intercept phone conversations of people deemed a threat to his rule.

In 1999, in the run-up to a controversial campaign for a third term, Fujimori ordered Montesinos to buy a television broadcaster and a newspaper to push the party line, prosecutors said.

A third set of charges that Fujimori admitted to Monday dealt with the bribery of members of Peru's congress.

Fujimori "designed, planned and directed" a plan to recruit opposition congressmen to his party after the ruling party failed to gain a majority during midterm elections in 2000, Andina reported. Money used to bribe the legislators came from public funds, prosecutors said.

Fujimori already was handed prison sentences in other cases. In his first criminal trial, Fujimori was sentenced to six years for breaking into the home of Montesinos' wife to confiscate incriminating videos. The court upheld that ruling in 2008 after an appeal by Fujimori.

In April, he was sentenced to 25 years in prison after being convicted of authorizing the operation of a death squad responsible for killing civilians. That case is under appeal.

During his third trial, in July, Fujimori was sentenced to 7½ years in prison for paying Montesinos a $15 million bonus out of the government treasury.